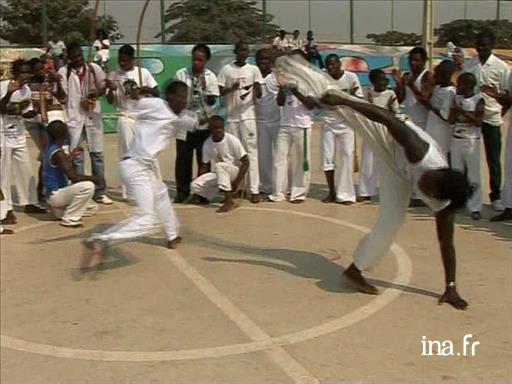 For most people, capoeira - an art which mixes fighting, dance and music - is associated with Brazilian culture. But in actual fact, the discipline originates from the west coast of Africa, especially Angola. Capoeira first appeared there about five centuries ago, among the African slaves who were forced to leave for Brazil. It was both a means of communication and a cry for freedom.

It is a martial art, a dance, a fight. But for these young Angolans, capoeira is above all a way to stay in touch with their history.
(Music)

The Portuguese, who were the first to leave their colonial footprint on Africa, arrived in the 15th century in what is now Angola. Up until the middle of the 19th century, about 4 million Africans were captured and sent across the Atlantic.
(Music)

Capoeira was initially the traditional dance of African slaves who had been sent to Brazil. For them, it was a cry for freedom. They wanted this freedom so much they created capoeira.
(Music)

Through the moves and the music, slaves who spoke different languages, were able to communicate with each other. But capoeira was also designed as a self-defence technique. Practised close to the ground, it is a combination of fluid motion, kicks and wide arm movements. Capoeira’s similarities with traditional Angolan dances, as well as the use of typical instruments like the berimbau, undeniably make it an African dance.
(Music)

Today capoeira is known and practised all over the world, and I am proud because it belongs to us, its roots are here.

I will never stop practising it, I'll continue because I love capoeira.
(Music)

Most people still consider capoeira as a Brazilian invention. But this will certainly change as the discipline becomes more and more popular. Its African origins cannot be ignored for much longer.
(Music)