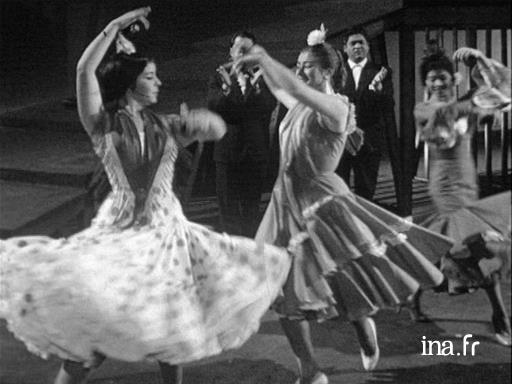 Extracts from a show performed at the Théâtre des Nations in Paris that includes flamenco. Inspired by José Monleón's "dramatic anthology of flamenco", dancers and musicians from Seville give their rendition of classics from the traditional art of flamenco.

Since the first public rehearsals organised in dance academies, dance demonstrations have always been essential as a means to discover fashionable dances, from home and abroad. The amateur public watched these performances, looking for an expression of the people and any unusual elements that theatre stages were often reluctant to talk about. The dance lesson was part of this appeal. It allowed the public into the intimate world of teaching dance.

In a book of interviews with José Luis Ortiz Nuevo [1], Enrique el Cojo (1912-1985) recounts the origins of the show Antologia dramática del flamenco (1963) based on an original idea of the writer José Monleón and used in Paris at the Theatre des Nations to represent the Spain for World Theatre day. At the request of Manuela Vargas (1941-2007), Enrique el Cojo helped him with the project. Among the dance numbers that he staged, there was a lesson where he played the role of the master and Manuela Vargas, the student. Enrique el Cojo trained other prestigious flamenco dancers, such as Cristina Hoyos. He always warned Manuela Vargas to stay away from the style of the flamenco ballet and to focus on the flamenco of the people.

The filmed commentary introducing the dance lesson reflects this approach. It does not manage, however, to avoid certain clichés. Of course, flamenco is one of the music and dance forms that originates from Andalusia. But it differs from other popular practices in this region in terms of the increasing higher level of technical skill required, owing to the professionalization of the artists. Paradoxically, it was far more successful outside Andalusia, and even Spain.

Here, the dance is being performed por alegrias [2], a style created in Cádiz following the «flamencisation» (aflamencamiento) of the jota gaditane. It retained its lively and cheerful spirit. It is one of the earliest forms of flamenco to be danced in 12/4 time. The dance lesson is built around two stages. To the sound of palmas - hands clapping, Manuela Vargas rehearses a zapateado, also known as a escobilla, which means a dance sequence using foot percussion. There is a demonstration of arm movements, braceo in between: it bears witness to the elegance of the Sevillian school and its controlled swaying hip movements, the meneo. Enrique el Cojo then invite hims to see a choreography accompanied by the singer Manuel Soto el Sordera (1927-2001) and the guitarist Enrique Escudero (born in 1938). His dance is essentially based on marcajes - (marking time with the feet) - which combine light taps with movements of the body.to accentuate the beat without masking the vocals. It is followed by the so-called "silencio", a sequence during which the guitar plays the tune de la rosa. The tempo quickens leading into different phases: the castellana and the very short escobilla. The concluding part, the remate, por bulerias finally brings the master and the pupil back together, who mix elements from the Bolero school with the flamenco aesthetic. This is the case in the passages performed face-to-face and in the final posture which is not unlike the bien parado, a final move that is much appreciated in Andalusian working-class dances such as the Sevillana and the fandango. You need to stand perfectly still and assume a graceful pose once the music has stopped.

[2] the expression «singing/dancing/playing by means of» - cantar por, bailar por or tocar por - means that the singer is expressing himself using a palo (or musical form), in this instance, the alegrías. It refers to three reference levels: the first attributes the origin of the formal creation either to a place, or to a composer (known or mythical), the second to a model rendition and the third to a variant of the latter.

In Andalusia, the word Flamenco refers to everything that relates to popular song and dance. Flamenco originated from Asia, it went through a filtering process in Africa and ended up in Seville where it quickly caught on.
(Music)

Flamenco is a universe. One of truth, of authenticity, everything that a human being needs to express directly, without beating around the bush, without shame, without any unnecessary complications. In this universe, It is impossible to cheat.
(Music)

In Seville, there is a flamenco school, which is run by Enrique el Cojo. This man is old, he limps, he is deaf.
(Music)

Flamenco lives inside him. He will pass on the taste for this sound to Manuela Vargas, his best pupil.
(Music)

Here we have a fandango for three dancers. The fandango of Huelva with its moves and castanets, it expresses joy.
(Music)

El Guito is without a doubt one of the most prodigious flamenco dancers. There he is in Mirabras. A kind of aqua fortis of flamenco, bordering on austerity.
(Music)

This wedding dance is a forbidden dance at least forbidden for non-Gypsies, It is banned because of its intimate nature. Gypsy parents celebrate the virginity of young girls.
(Music)

We can hear the petenera. The petenera signifies tragedy, It is the tragedy of a man who does not understand women. The suffering of the man because of the woman, this being that sometimes eludes him and whom he would like to touch emotionally.
(Music)