Seeing blue in the overseas territories: Zouk and its history 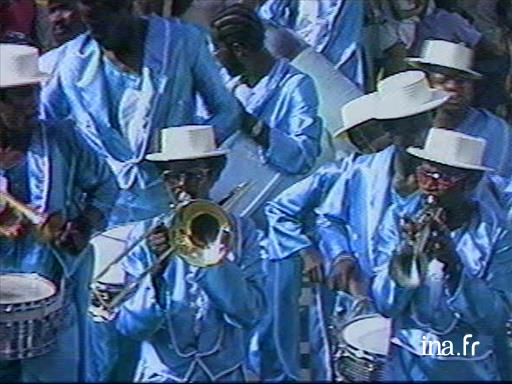 Interviews with Jocelyne Beroard and Jacob Desvarieux from the group "Kassav» help us to gain insight into zouk, a musical phenomenon originating from the Caribbean musical tradition.

In the same way that creole is a mixture of different languages, Zouk is a type of music whose multiple influences were drawn from the diversity of Caribbean music. Since its creation in 1974, Zouk has continued to be the most popular music in the Antilles and symbolises the emancipation of a people who were able to invent their own music and own romantic dance for couples.

In the early 1980s, Jacob Desvarieux, surrounded by other musicians including the singer Jocelyne Beroard, found the recipe for this clever blend of tradition and modernity: Ka, Konpa, Funk and Rock. For more than thirty years this leading Zouk group widely increased the notoriety of the Antilles throughout the world and got the whole planet dancing to its signature song: "Zouk la sé sel médikaman nou ni". They continue to breathe life into and write the history of Zouk.

This music that wafted about in the air in the French Antilles, Guadeloupe and Martinique, began to sweep across Europe and French-speaking parts of Africa. It’s like a whirlwind of mixed sounds. After the waves of jazz, merengue from Santo Domingo, salsa from Cuba, the cadence rampa from Haiti and recently, reggae from Jamaica, the French West-Indies have created a new type of music called zouk.
(Music)

When a tourist arrives at le Raizet airport in Guadeloupe, he only has one choice, to get with it, as zouk is the reality of daily life in Antilles. It can be heard in taxis, minibuses, supermarkets and on the streets. You can hear it everywhere. Clubs and record stores are raking it in thanks to the magic of zouk. Briak Loyant, a musicologist on holiday in Guadeloupe from mainland France was bowled over by zouk.
(Music)

In France, at the moment, we hear it almost everywhere, we hear... We all know that Malavoi, Kassav' and Zouk Machine put on concerts. It is a music style that is really, really alive, really colorful, sensual even I would say, and which has a certain appeal, it calls to you in quite an irresistible way. So, that's why, well, when I hear Zouk, I can't resist it, I immerse myself right away!

Zouk is the musical reflection of this original mixing of races, traditions and civilizations that has occurred over the centuries in the French regions of the Caribbean. It was the band Kassav', with the Decimus brothers who gave the decisive impetus to this new musical style. Kassav' is a incubator for stars who include Jocelyne Beroard and guitarist Jacob Desvarieux.
(Music)

Jocelyne has been our singer, er, since... To begin with, I think we did everything to sell her as a singer, to sell her as a woman and to sell the idea that a woman can be a star in the West Indies, which was not so obvious before.

It's good to be able t present our folklore, the culture of our country, without it being too touristy.

We always try to find things that are starting to be lost, to make them fashionable again, so that they will be remembered by people of our generation and especially by future generations and can be allowed to continue.
(Music)

Kassav' is popular and moves crowds of people in the West Indies, in Paris and in Africa. He disc went gold, a 100,000 copies sold, an unprecedented achievement for a Caribbean Group. Françoise Lancreot, a musicologist and flutist who specializes in the study of afro- Caribbean music thinks that zouk is a real phenomenon.
(Music)

I believe that zouk is a phenomenon, this phenomenon became apparent more than a dozen years again, and it has met with great success recently because zouk music is now arranged differently. Now, there are brass sections that are quite powerful, there are also effects that can be found in rock music; and I believe that this modernism that has been added to this music has given it a different flavour. Musically, it is to some extent the reflection of the personality of the Caribbean. It reflects to some extent the new musical face of the Antilles.

The reaction of Tania...