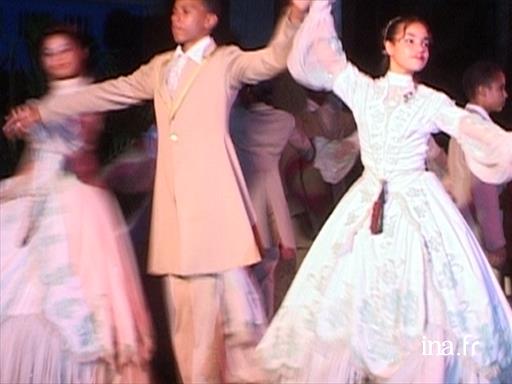 This beautiful documentary presents the essence of this dance, which is also a music, a rhythm and its own culture all rolled into one. Here, we can still see a 2x3 step system, alternating left and right. Now all you need to do is to listen to the music; the explanations given by the pianist are especially accurate.

Without wanting to complicate matters too much, remember that the first rhythm to combine two different lengths is the Greek anapest: the famous "quick-quick-slow". This is the basis of polka, which was also exported, of course. This rhythm can easily be seen in the habanera. Musically speaking, it is more difficult, because the two so-called «quick» sounds are not the same length, there is a clearly something that has been «mixed» with polka's simple rhythm, affecting the two «quick» sounds, as if it already were becoming a «swing».

It is easy to understand that all these rhythmic patterns, which are so similar to one another, came to be intermixed, exchanged and enhanced with one other, and anyone would have to be extremely clever to be able to pinpoint an exact origin in time and space. It is also very easy to identify them in other countries. Because, of course, these moves and these rhythms travelled, for example, with sailors from the Caribbean, and they migrated, first to Brazil, which bestowed it with the characteristic rhythm of the samba by mixing with other typical Brazilian sounds; then, to Buenos Aires, where other fusions and hybridizations took place, which we will see later.

Finally, it would not possible to talk about this large family of Afro-Cuban rhythms without mentioning something about the clavé, a word that refers both to an instrument made with two small wooden cylinders, and the favourite rhythm the Cubans obtained from it. The slaves who worked in the ports and who were deprived of opportunities to make music appropriated wooden plugs which allowed them to assemble wooden crates, which they could make "sing". And this is how the clavé was born, in two-halves: the bottom half was ingeniously coiled above the palm and acted as a sound box while the top clave gently tapped on the bottom half to make it sing. Despite its small size, this instrument can be heard from very far away. And it is extremely characteristic.

The Cubans who never stopped creating rhythms with these two pieces of wood, obviously used habanera, and milonga rhythms, and created others which were exported throughout the world. In particular, the most well-known clavé rhythm, which was merely a development of the milonga-habanera rhythm, insofar as the two sounds are grouped together to create a syncopation, but in duple metre: the first creates the syncopation , while the second one uses that of the Polka to soften the rhythm And several variants of this basic clave rhythm spread.

Finally, we could also quote one other «child» of milonga-habanera, the cinquillo rhythm:

The danzón was the national dance of Havana as early as 1880, until Cuban son came to dethrone it at the end of the 1920s. And there could be no important celebration without a danzón or a son being created for the occasion.

Finally, do not forget that a Frenchman, "Mr Pierre» (Zurchir-Majd) and his English partner Doris Lavelle came to fame for their French research on mid-20th century Cuban dances. They worked in Cuba with Pepe and Suzy Riviera, famous dancers, and brought back dance techniques used in dances like rumba and cha-cha-cha to Europe. It was there that they named the most common figures, figures that still have the same names in dance classes today.

Important note: what Europeans call "rumba", as do the Americans, who were the inventors of this terminology (they even wrote it: "rhumba"), is from the point of view of dance: Cuban son; and from the musical point of view, Bolero. It didn't seem to matter that Cubans didn't have a dance, let alone dances, in their culture with such a name. There are three things called the rumba in Cuba: cumbia, guaguanco and the Columbia River. And none of them is a closed couple dance, nor a ballroom dance! Now, everyone can make the difference between which dances have come about from the intermixing of existing styles and sounds and those that are merely products of commercial recycling, which Europe also saw in 1989 with the lambada.

Havana was the capital of the new world. A huge, rich and aristocratic European city. It was here that this first encounter took place in the 19th century, that gave rise to the first hybrid music.
(Music)
(Noise)

Palace of the Captain General on the island of Cuba, the seat of power. Cuba was not only a Spanish colony but a province of Spain, the richest and most beloved. In the capital, while men were making war and business, the women got bored. In this paradise where the Spanish aristocracy found a land of games, time passed slowly and left room for dreaming and sentimentality.
(Silence)

And despite the differences between classes and races, people were naturally brought together.
(Silence)

The love of music and dance had of course its role to play. Colonial society was rich and only thought about being entertained, which gave the opportunity for black musicians, sons of freed slaves, to step into this world.
(Silence)

A French traveller related the pomp of Havana in 1844. He arrived on the day Isabella II, Queen of Spain, was giving a ball.
(Music)

There were more than 30 finely dressed Generals, the great figures of Spain: admirals, chamberlains, diplomats, counts, marquis, and dukes. I had never seen so many top officials together. Gold, silver, and jewels flowed over their collars.
(Music)

Decorations that were still reminiscent of courtiers to monarchs in lands where the sun did not set.
(Music)

He seemed to observe this luxury as if this was the last remaining court, as if the old world had come to die here. He was especially captivated by the ball and the music played there.
(Music)

It wasn’t like the French contradanse or the Fandango from Spain. It was more original than the former and less spirited than the latter, this dance was in perfect harmony with the character of the Havanese youth.
(Music)

It was a sweet mixture of alternately passionate and slow moves, but what struck the onlooker the most was the ideal grace with which the Havanese dancer varied his few figures by restarting them.
(Music)

Havenese music, composed of sighs, sharp moves, and sad choruses offers a singular mix of cheerfulness and melancholy. The dance tunes are full of freshness, but bristling with syncopations and offbeats which make them extremely difficult to play. The famous cellist Bohrer confessed to me that he had tried in vain to decipher a part for the double bass played every night by one black man who didn’t know a single note. This black man, who supposedly couldn't read music, was the father of a new musical genre. He transformed classical European music into creole music.
(Silence)

I shall play you an example of a contradance by Mozart, from Europe, where we can already find some elements of Cuban contradanza.
(Music)

We find this contradance by Mozart in Cuba in a creolized contradanza in the 19th century, to which people danced. It was played by an ensemble of wind instruments, which gave it a different flavour, a certain humour, and a different style. We can more clearly identify the beat of the habanera in this part, for example...
(Music)

In the second part.
(Music)