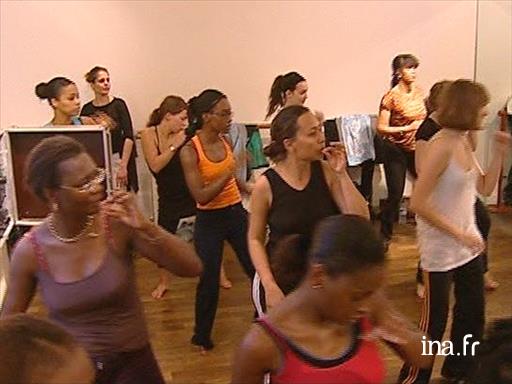 A dance invented 4 years ago by a group of friends, just for fun. Today it is a real phenomenon, it even has its own dance school, which is never empty.

Everything can be used as an excuse to create a new dance form, even imitating a chicken dying of bird flu.

This extract, originally entitled "The Coupé Décalé dance: move your body on serious issues addressed with levity", presents this Ivory Coast-style musical and choreographic genre, which was born in France at the beginning of the Millennium. It was aired on French public television. In 2008, by the time the news story was released, the movement had already extended to all French-speaking African countries, to the West Indies, despite the death two years earlier of its founder, Stéphane Hamidou Doukouré, better known by the name of Douk Saga. In France, the phenomenon, despite its occasional appearances on national media, was limited to the "afro" nightclubs and a few modern dance courses.

Coupé Décalé presents itself as a form of entertainment, a simple, fun and accessible dance that allows the dancers to communicate quickly by means of certain key gestures. Behind each song there is a concept and a specific choreography, with a more or less important meaning.

Because the dancers' excessively flashy look and their very, very funny dances hide a story and a meaning which generally escapes the uninitiated.

Coupé Décalé appeared in two specific contexts, which helped breathe meaning into this seemingly superficial movement. After its appearance among the Ivory Coast community in Paris, Coupé Decalé developed thanks to a younger generation of migrants whose lives were difficult and who were generally involved in darker activities. For true initiates, even the name of the song goes beyond a simple choreographic description. In Nouchi, a form of Ivory Coast slang, «coupé» means, to fly, to scam», and «to escape», or «to return home». Coupé Décalé originally referred to the art of "browsers", small bandits specialized in Internet fraud, who usually targeted the wealthiest countries. But it was not until it returned to the Ivory Coast that the movement, against the backdrop of an economic, political and military crisis which lasted until 2011, grew in popularity on an unprecedented scale. The country, following disputed presidential elections, become fragmented and subject to international intervention led by French interests. Loyal supporters of the recently elected president Laurent Gbagbo were confronted with rebels, led by Alassane Ouattara, who challenged the elections. In this environment of economic instability, with the threat of war looming, and with a people that was divided, the Coupé Décalé with its carefree, joyful and light attitude, succeeding in uniting a people under the same banner, that is the say, to the same moves. Through the multitude of dances it created, the movement describes the problems of daily life in Ivory Coast, and diverts their senses, to solve them using humour. When in 2005, the H5N1 flu pandemic, more commonly known as bird flu, arrived on the African continent, Ivory Coast which was on the brink of civil war, was hardly in a position to meet the WHO recommendations designed to prevent the spread of the virus, or compel its population to decimate their cattle, which was essential as a food source. DJ Lewis, inventor of the bird flu song/concept/dance, provided his answer and used humour to exorcise the local worried, by means of a choreography that was soon to «infect» many other African countries. He was invited a few years later to Paris, to the dance classes of the warm host Maimouna Coulibaly.

This evening, showing off is compulsory. Wearing fur is advisable, even at 35 degrees, dark glasses are a must, a flashy look with a maximum of bling-bling. For the dance, you sway your body to jerky music, it’s the coupé décalé, a dance invented by this group of friends four years ago, just for the fun of it.

We came here, we put on our little shows and all that, and people liked it, well, so, they started to ask us to come. So that’s how the coupé décalé started, every weekend, every Sunday.

For a long time, the coupé décalé could only be found in Afro-Parisian clubs but today, it has become a true phenomenon. This dance hall has been packed every day for the last few months.
(Noise)

There are girls who come from the estates, others come from posh areas, and I think that all the people who come from such different backgrounds are there for the dance. With the coupé décalé, you can just let yourself go. And you don’t need to spend a year or two learning classic music before starting.

We like the coupé décalé for its wacky style: it uses stuff from the news or something from everyday life, everything is an excuse to create a new move. For example, imitating a chicken that is dying of bird flu, is very trendy at the moment!

You make gestures with your body, and then, very, very funny dances, well, we do the bird flu and, also the colgate, like the toothpaste. I found it funny, so it’s great for letting off steam.

I know you’re not supposed to laugh about a serious disease, and yet we do. Yet we do, well, we take negative things and we turn them around, to de-dramatize them. One, two, three, four, five, six...

You raise your hand in the air and shift your foot across. This is the main move. But in four years, 150 new figures have appeared, so there’s plenty for you to have a good time in a spirit that is a little bit quirkier every time.
(Music)