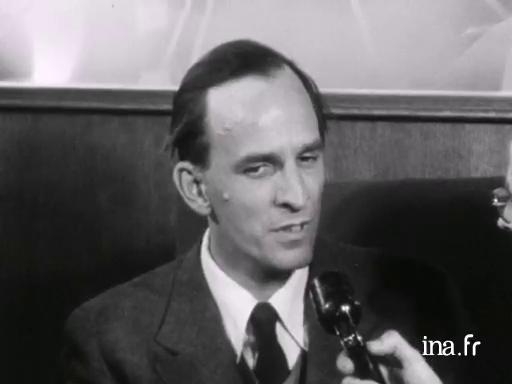 Ingmar Bergman answers André Parinaud's questions on the theatre and film directors he admires, the French plays he'd like to stage, the differences between directing plays and films and the despair that haunts his earliest films.

Known in France for his 1950s films (Eternal Mirage, Smiles of a Summer Night, The Seventh Seal and Brink of Life were presented in competition at the Cannes Festival), Sweden's Ingmar Bergman (1918-2007) started his career as a screenwriter 10 years before becoming a filmmaker, which he remained until the 2000s.

Malmö's theatre director from 1953 to 1960, and also Stockholm's theatre director thereafter, he staged The People of Värmland there in 1958, an emotional reminder of his childhood Christmases. This quality Romeo and Juliette signed by Fredrik August Dahlgren tells the story of the destinies of two peasant families, one rich, one poor. In 1959, Bergman comes to France to present this "saga", with a troupe of actors that are somewhat familiar to film buffs since they include Bibi Andersson, Max von Sydow and Gunnel Lindblom.

When asked about his tastes as far as French theatre is concerned, he reminds us that he staged Molière (The Misanthrope), Albert Camus (Caligula) and even Jean Anouilh (Medea). Even if there's a clear line between his stage directing activities (his work) and his film-making (his passion), he sums up his quest in both domains: "Telling the truth about the human condition".

Welcome Ingmar Bergman, and forgive us for picking the hectic atmosphere of an aerodrome, the bar in an aerodrome to speak with you and ask you a few serious questions. Ingmar Bergman, first of all I'd like you to tell us, since you're above all a theatre director, who are the directors you like in this world, that you prefer over all others and who inspire you.

When I was a young man, I saw the French films and I admired Duvivier, Carné, immensely, René Clément, naturally.

Here, you're citing film directors, but amongst directors... the big theatre directors?

In Sweden, we have a long tradition of directors, and two Swedish directors are my masters. They are Molander et [Schubary].

It's very difficult to say right now. But I do Calligula and Ionesco, I don't know the French names of these plays.

Is there a big difference for you between directing theatre and directing films?

Yes, there's a big difference. I love directing theatre. It's a profession. It's my profession and it's necessary for me. As for directing films, it's my passion.

Your passion, your great pleasure. I would like to ask you one final question. Sweden is one of Europe's most advanced countries, socially and economically, yet most of your films, especially your first films, are full of bitterness, despair and even cruelty. How did Swedish happiness inspire these feelings?

I only seek to speak the truth about human condition.

Well, we're now impatiently waiting for your saga. See you soon. We will applaud you.