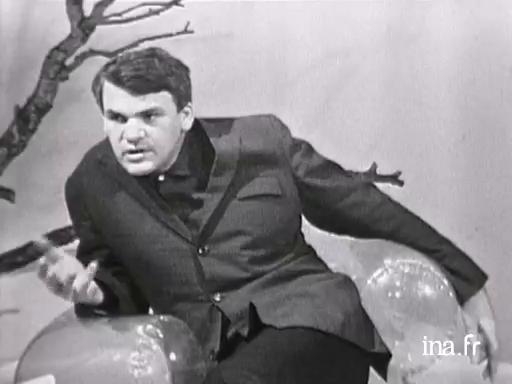 While balancing himself in an inflatable armchair, Milan Kundera presents his novel The Joke, whose story is a part of twenty years of Czech history.

Born in 1929 to a family of intellectuals and artists (his father was a musicologist and pianist), Milan Kundera studied literature, aesthetics and then cinema at a Prague university. He gained recognition very early on for his innovative poetry (Monologues, 1957). But his erratic relations with the Communist Party, with which he affiliated himself in 1948 before being crossed from their list in 1950, reintegrated in 1956 and definitively banished in 1970 because of his role in the Prague Spring, earned him the censorship of his work during the Soviet repression.

In 1975, the publishing year of The Joke, a novel that was immediately seen as being critical of totalitarianism, he exiled himself in France and was stripped of his nationality in 1979. From then on, he wrote in both Czech and French (Slowness, 1995), taught at the Paris's EHESS, and became a naturalised citizen in 1981. The publication of The Unbearable Lightness of Being in 1984 and its adaptation by Philip Kaufman in 1988 gained him international recognition, as confirmed by the 1990 publication of Immortality.

His works, through his novels and also his essays (The Art of the Novel, 1987), set up subtle meditation on the cultural origins and the modernness of European civilisation. His last novel was Ignorance (2000), written in French but first published in Spanish.

What is extraordinary, is the twenty year development of all these characters. Could you talk about what happened to the character who says "I" most of the time in your book?
(Silence)

When the novel starts, he's a student. And what happens to him from them on?
(Silence)

The novel starts in 1948, but the days when... this story, it's the story of three days. These three days, these are the memories which return in these...

Yes, it's a flashback but in fact you really have the impression that you are living through these twenty years with this student who for a joke, which is where the title of the book comes from, will see his entire life changed but not in an amusing way. What was this joke?
(Silence)

The title of the book "The Joke" has many meanings, firstly it's an actual joke. It was a little letter sent by a student to his fiancee or to his girlfriend yes, which was censored. So it was a joke which was written in this letter. This joke starts the development of the story in the novel. So it's a joke in the actual sense of the word. And then, the joke means for me, for this novel, a certain type of life generally. Because the character in our story was quite funny, and in my opinion, is a grotesquely tragic character. We have really lived the story's big joke. So, the other sense of this notion "The joke", perhaps you could also say "The trick". I've also thought a lot about whether it would be better to say "The joke" or "The trick".

Since the title of the book is "The joke", let's stick to "The joke".

What is quite significant I find, is that this "joke" of sending the post card which was mocking the optimists, which was clearly looked on very badly at the time, is sent to a woman, because the person who sends it finds that this woman who is his friend, is a bit stupid and a bit of an optimist and is a bit over zealous. It's not by chance in this sense that it's something sent to a woman, because women will play a big role later in the book. The hero, I summarise a bit so it's easier for our listeners to see what it's about, the hero behind this joke will be driven away from the group, driven away from university, and sent to a disciplinary battalion where he will be a minor, a coal minor, a pit minor. And at that moment, he will meet another woman, and they'll have a very interesting adventure, very unusual, I wouldn't know what to compare it to. The romance between this soldier, former student, and this girl who is called Lucie.
(Silence)

What did you want to say with this story of Lucie? It's difficult to interpret this novel, it's very difficult to do because things are always simplified and I am the worst interpreter of my novel. She is a woman who's a sort of myth for this hero.
(Silence)

Yes, it's also through a woman. I always thought that I had written a love story. Unfortunately, and particularly abroad, this book is considered a political novel. As far as I'm concerned that's completely untrue. Naturally, this love story is totally determined by historical conditions, which are in my opinion totally unique and without precedent. So these historical conditions pose completely new questions.
(Silence)

And what's very interesting, is to see how time passes, as this novel is very complex and as cannot be reduced just to a political novel. It's more a pirandellian novel where the good guys are not always so good, the proof is the behaviour of the narrator with this woman Helene though whom he will take his revenge, where the bad guys end up not being bad anymore because the whole world has changed, where there are secondary characters who you're not sure, in the end, whether they are opportunists, whether they are simply a bit silly, or whether they are on the contrary moving and touching. Time unifies everything in the end including the survivors of this great adventure be they perpetrators or victims, What's very interesting, in the eyes of the young and you show this at the end, is one of perhaps the most moving passages of the book, which is very moving, and even for young people for whom it means nothing to have been sent into the coal mines, or to have been the one to send a friend into the coal mines. And well, it's the same. It seems to them old-fashioned, outdated, it's an old person's story. Is that really a feeling that you have had?

I don?t yet know what to say about this book. I believe that our spirit is clearly a bit distracted by the attention that we pay to everything that comes out of Czechoslovakia today and to Czech drama. But you have to think that this is a work of art, so that's how I would like to finish. You have to think that this book, in other circumstances, would have deserved equally to last, to find ardent admirers. I believe that I am one but there will be many others. It's a shock a bit like the first time I read Pavez, and those who know me will know that it couldn't be a greater compliment on my part. In any case I thank Milan Kundera for coming, for making the effort to speak in French with us a bit. And I remind you of the title of this work: "The joke".
(Music)