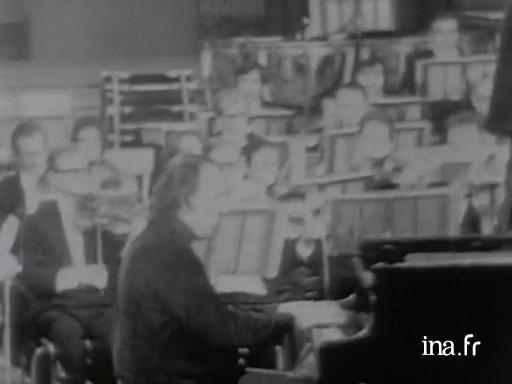 Born in 1912, Sergiu Celibidache studied music and philosophy in Bucharest and in Berlin. At the end of the war he was a director of the Berlin Philharmonic. Then, he directed numerous orchestras around the world (South America, Scandinavia, France, Italy), and after that devoted himself to the Munich Philharmonic Orchestra from 1979. He directed the great German repertoire, Brahms, Beethoven, Schubert, but also Russian music, Debussy, Ravel and particularly Bruckner, which has given some famous recordings. On that topic, it must be noted that, contrary to Karajan, he practically never wanted to record, neither in studio nor in public. He thought that recording didn't capture the essence of music, the union of a place, moment, audience and access to transcendence. In this we see one of his terribly demanding aspects. Many recordings do exist, often cult-objects for music-lovers, but they were recorded without the conductor knowing, or at least at his indifference. Another fascinating aspect of Celibidache's personality are his lyrics: his very personal and mystic conception of music, his oral training, his taste for philosophy and especially Zen Buddhism have all contributed to build the legend of this mythical conductor who passed away in 1996.

To commemorate this anniversary, the National Orchestra will give two great performances, tonight and tomorrow, and they have called on great pianist Benedetti Michelangeli who will play under the guidance of Sergiu Celibidache.
(Music)

Amongst them, the ten musicians that have been with the National Orchestra since its debut 40 years ago now remember. Its creation was decided by Jean Mistler, who was minister of the Postal Telegraph and Telephone agency at the time, and who was in charge of supervising radio. He wanted a great National Orchestra, then a European one and so he put Désiré Inghelbrecht, whose Flemish name means fallen angel, in charge of creating the orchestra.
(Music)

90 musicians followed his conductor's baton back then. Today they are over 200. And the greatest conductors have lead it, from Toscanini to Münch.
(Music)

You don't have a musical movement that represents France, which would be the gift of the people. We're below that. Musical life in France is rather mediocre in my opinion. Although the musicians aren't lacking anything. They are the best musicians I've ever found. It means there's good musicians everywhere, of course, but I've never worked as fast with results as great, as positive, as palpable as in France.
(Music)

Sergiu Celibidache, whose father wanted him to become president of the republic and who got angry at him and chased him out of the house when he realized that his son was only interested in music, rehearses a lot for his concerts and refuses to record albums.
(Music)

In 40 years, the National Orchestra has become one of the biggest orchestras in the world.
(Music)