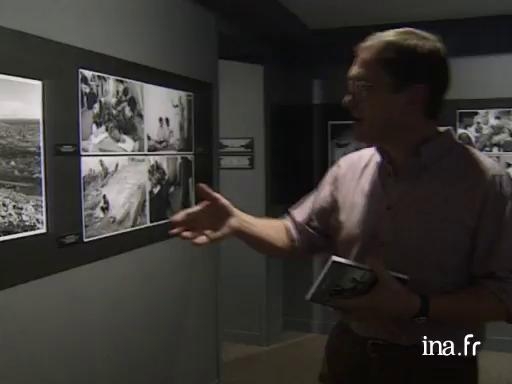 In the context of an exhibit of John Vink's photographs of refugee camps, organised at the National Centre of Photography, John Vink explains his reasoning and his decision to shoot in black and white. Rony Brauman, former president of the MSF, highlights the importance of these pictures, which are a witness to the tearing apart that refugees are subject to as they leave for a new life.

John Vink, born in Belgium in 1948, was an independent photographer from the age of 23. From 1980 he led several long-term projects, first in Italy, then in sub Saharan Africa where he worked on water management by the sedentary or migratory populations. This work earned him the Eugene Smith Award in 1986.

He then joined the VU agency and for five years bore witness to the life of refugees all over the world. In 1993, he joined the Magnum agency which he became a member of in 1997. He then became interested in the "Peuples d'En Haut", communities in the mountainous areas of Guatemala, Laos and Cambodia to show how these people, living in difficult conditions, have become strong and proud of their cultural identity.

Tired of travelling, he moved to Cambodia that he had often visited and through books and exhibitions presented the evolution of this country. To him, the objective of photography is not to change the world, but to inform and to witness.

In your opinion, what is the greatest distress of refugees? Material destitution, or the inner pain caused by being uprooted?

I think that everything depends on the cause that lead to exile. But in the first instance, at the moment when they arrive in a refugee camp, it is evident that it is the material side. It's a matter of food!

It is first we must eat, we must be cared for, we are sick, we are hungry, so they begin with that... I have the impression that among all the pictures, those that are the closest to Rony Brauman, are those that speak of Sudan, because it is a situation that no one speaks of, and I know that it must be very very dear to his heart, to have people like that Only MSF (Doctors without Borders) and a few other NGOs are paying attention, and I know that the objective, on the part of the MSF, was that, to help those whom no one speaks of, who are alone, what, in some way. And on the other hand, it is the pictures that show the complexity of the MSF task. Médecins Sans Frontières does not only provide medical assistance, they also have a logistic infrastructure which is completely extraordinary. They manage to provide small receptacles to ear from, to create housing for people. They are not exclusively addressing medical issues.
(Singing)

In your opinion, which picture best defines John Vink's style?

In the measure where his talent consisted, outside of the artistic quality with which it is realized, consisted of showing what showing what is in fact, the daily reality that is the life of refugees, I chose somewhat haphazardly 2 ensembles that seem to The first is the departure, for every refugee has left, has been torn from their home, has experienced this rending, this trauma, that is the abandonment of one's village, city, the separation with one's family, the in extremis gathering of those goods th This tearing, this scission, I think that it is what creates from the outset the situation of a refugee, which is very well depicted in this highly selected ensemble. But there is also something else, because the refugee, it is not only the end of everything, it is also a new beginning, it is also, and not only by means of assistance, it is also a taking charge, the discovery of a new life. And it seems to me that this whole which is in general very little illustrated and about which we know very little, shows that the refugees, they work. They work hard for an education, to prepare their future, they work to take charge of their friends, their compatriots in the camps, for example. That for example is an exam session for training medical assistants that will help the Médecins Sans Frontièr They will therefore be of use to their community, to the collective whole, the children study and the children prepare the future. This is very important, so the refugee, the refugee camp, it is not simply aid, it is also sometimes a new life in difficult circumstances, in the tumult, sometimes in the violence, but it is also something new that is inscribed in the lives of people.

And stranger to a camp is not an intruder because the people in the camps have very very quickly, are very quickly confronted with external help, so they know that we are useful. Me for example, as I do not bring any material things, I do not bring food or medication or other things, but in fact I bring them a voice, I give them the opportunity to speak. And that is what they need to understand, that I am their spokesperson to those here in Europe who should be sensitive to what is happening to these people.
(Silence)