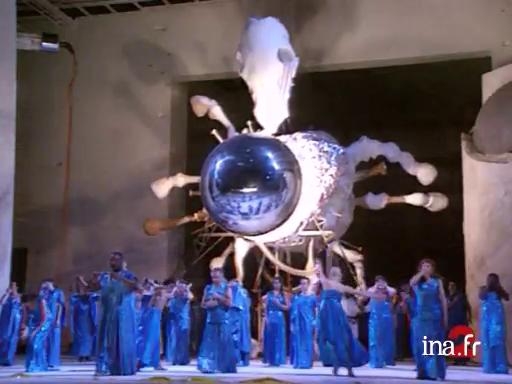 György Ligeti (1923-2006), a Hungarian naturalised as an Austrian in 1967 is an outstanding figure of contemporary music. His varied work included chamber music, electronic, orchestra and studies for the piano. A lot of his compositions are distinguished by an intense polyphonic and static forms (Atmosphere, 1961), particularly in the 1960s. From the 1970s, his writing became more transparent, like inLe Grand Macabre(1974-1977), flagship opera of the 20th century. The cinematographer Stanley Kubrick used his music in2001: A space odysseyand inEyes Wide Shut.

At midnight sharp, Death promises to bring the apocalypse, and here he is, right on time, on his horse with the reflecting torso held out by Peter Sellars, an [author]. It must be said that Peter Sellars threw his craziness and his excessiveness to the stage. An alcoholic, campers, a nuclear plant, Venus naked fighting over a victim against Death, who wears a tuxedo.
(Music)

It must be the 8.00 pm news broadcast, but bizarre and strange for an 8.00 pm news show. It's just that... And that, this is our world, of course, and it's bizarre and it's strange. And for a little end-of-century evening party, well...
(Music)

During his entire lifetime, Ligeti has defied Death. A Jew, he escaped Nazism. A Hungarian, he had to flee communism.
(Music)

It's a play that says: no one will die. We still have a bit of time left to live, so we live as best as we can with what's left of it. That's the essence of this play.
(Music)

At the end, love triumphs, dark humour helps us live. With this, Ligeti and Sellars agree wholeheartedly.