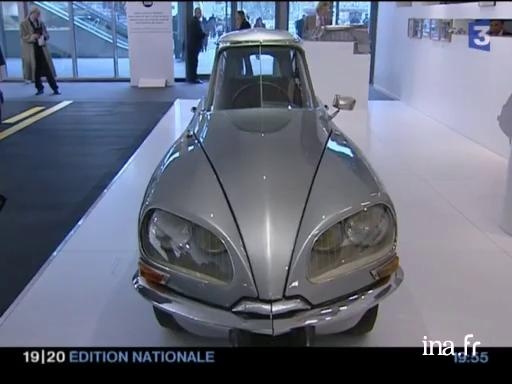 A true cult object since it was launched in 1955, the Citroën DS is honoured today at the International Contemporary Art Fair (FIAC) of the Grand Palais, where it's exhibited in all of its forms. A look back at the history of the mythical car, from the studio of Flaminio Bertoni, its designer, up to the artistic dismantlements-reassemblies in the 1990s, stopping along the way with General de Gaulle and stars of the 1960s.

Behind the curved lines of the star of Citroën cars hides the pen strokes of Italian automobile designer Flaminio Bertoni.

Born in 1903 in Varese, Bertoni interrupted his studies to become an apprentice for the construction firm Macchi, while continuing to practise drawing at night school. An admirer of Leonardo da Vinci (he gave his first son the name Leonardo in 1932), he never stopped improving his style to the point of attracting his employer's attention who moved him over to the graphical conception department. In 1929, he finally founded his own design agency and had large construction firms of the region as clients. Hired by Citroën in 1932, he designed a model for the "Traction Avant" and began to collect prizes and awards. The "2CV" saw the light of day on paper in 1935 but would not be built and sold until after the war. Living in Paris, he continued to work under the occupation and would be briefly incarcerated upon liberation.

The presentation of the DS 19 at the Salon de l'automobile in Paris in 1955 brought a great success and earned him two years later the triennial prize in Milan. The failed assassination against General de Gaulle on the 22nd of August 1962 attracted him unexpected publicity: having taken place in a DS used by l'Elysée, the President of the Republic emerged unscathed from the gunfire. Bertoni died in Paris in 1964 at the age of 61. The town of Varese has now built a museum dedicated to him.

At first, it was a technological performance, and then, the DS quickly became a car for the country's elite, whether they were political leaders or movie stars. It's celebrating its 50th birthday and it's one of the stars of the FIAC, the International Fair of Contemporary Art. We can therefore admire it in Paris at the Porte de Versailles, in diverse forms, in several different pieces as well as Jean-Jacques Peyraud and Olivier Tieth show us.

"The uncontested star attraction of the fair is the Citroën DS 19, which has all the consideration..."

Even if its original name - DS ("déesse", or "godess" in French) - already suggested that it would be immortal, nobody had any idea in 1955, what the destiny of this car would be.

Adopted right from birth by the general de Gaulle, the DS quickly became the essential companion of all 1960s celebrities. A stylish and fashionable object, a symbol of modernity, it became a legend little by little. 50 years later, it's a truly cult object, the Mona Lisa of automobiles whose exhibit presented at the FIAC dissects the parts: the door handle, the blinkers, the steering wheel with only one branch as if we were trying to uncover the secrets that made this car so unique. Secrets that are the result of the talent of its creator, Italian designer Flaminio Bertoni. He also gets the credit for the silhouette of the 2CV and the Ami 6. An ingenious creator, as Henri Dargent confirms, who was Bertoni's assistant for 10 years.

He had a background, let's say, of coachbuilding, of shaping since he made metal busts of young women, with tools. That was a sculpture that was both instinctive and sensual.

The DS was a work of art. To the extent that, in the 1990s, it became a source of inspiration itself to artists who would play with it. French artist Arman who splits it into pieces in this "Schmilblik", and Italy's Orozco who makes its width shrink to half its size. And what's miraculous is that even when it's crushed and reduced to pieces, the car remains identifiable, unalterable, in short, a godess.