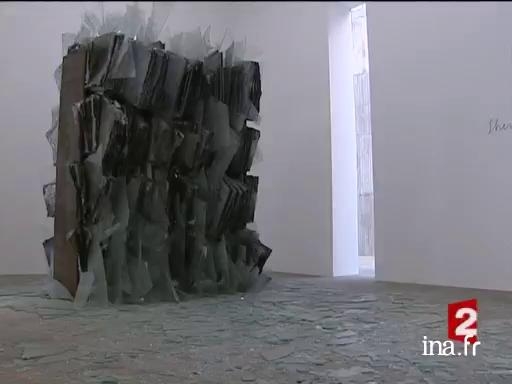 Report dedicated to the preparation of an exhibit of Germany's Anselm Kiefer at the Grand Palais, an exhibit that required that the builiding be completely refitted to be able to display the artist's massive works.

Anselm Kiefer is emblematic of post-war German artists who tried to reconcile their country with its history, not without some painful memories to work through.

Student of the Karlsruhe Fine Art school, his final thesis caused scandal in 1969. It was a re-transcription of a performance that led him to do a Nazi salute in several European towns. Far from simple provocation, this gesture aimed to stir up a period that was still very new that had passed into silence as a dangerous taboo. In this wish to look his country's past in the face, he declared, "my biography is Germany's biography."

His work was thus built around Germanic history and legend, Jewish culture and poetry. Influenced by Joseph Beuys who was his professor, Anselm Kiefer is generally classed as a neo-expressionist. The Plasticien has lived and worked in France since 1993, in Barjac in the Gard region.

... In Paris, an exhibit of Germany's Anselm Kiefer until 8 July. To welcome his massive works, the Grand Palais had to be converted. Visit of the building site with Christophe Airaud and Virginie Travert.

For the last few days, it's been said that the Grand Palais will still be in the midst of construction. In this decor of crane, trucks and rubble, we see a man with a white helmet, who looks like a construction leader. It's Anselm Kiefer. The artist has turned the Grand Palais into his studio.

I've had lots of studios in my life, but this one is one of the most... It's very beautiful, yes.

Anselm Kiefer has therefore moved into the 13,500m².

It was a good idea to [inaudible], wasn't it?

And to rival the majesty of the building, he made his universe shoot up from under the Grand Palais's glass roof.

From the entrance on, the decor is set. Destroyed towers, war ruins, concentration camp watchtowers, and shipwreck memories, Kiefer, born in Germany in 1944, has long been obssessed by humanity's chaos.
(Music)

I think, despair, each one of us can feel despair anywhere, with any story, because we have no information, we are not certain why we're here, where we're going, why evolution has made us the way we are.

But afterwards, we can head for the shelters. And that's where massive canvases are exhibited.
(Music)

A mix of paint, of ochre field dirt, of dry and faded plant illustrations, some tales perhaps, probably some poems.
(Musique)

Anselm Kiefer, he's an artist that works... I mean, who refers to a wide variety of things and whose work is at the same time massive, full of poetry, with references to history, to the cabala. So, there are multiple entry points.

The exhibit is called Fall of the Canvases, and Anselm Kiefer's version of the Grand Palais has become a devastated ground and a wall under construction.
(Music)