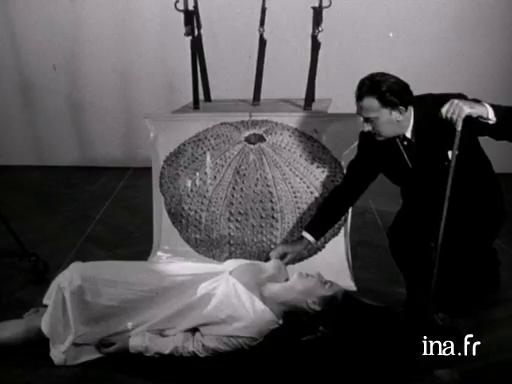 Happening with Salvador Dali at the Moulin de la Galette in Paris, where he begins illustrating a new edition of Don Quichotte. In front of a crowd of onlookers, he traces the master lines of the future masterpiece with the help of his usual talismans: rhinoceros horns and bread croutons, with an all-season car for the easel.

Salvador Dali (1904-1989) could easily incarnate "the complete artist" of the twentieth century. "Dalinising" every discipline from painting sculpture, from cinema to writing, from design to fashion his first creation was undoubtedly himself. Conceiver of the "paranoid critic" method which put his anxieties at art's service, Dali preceded Warhol in the advent of the artist celebrity.

His fame was built around four pillars: a symbolic universe, famous friendships, a mythical muse and the skilful management of scandal. Morbid ants, sea urchins representing the life force, curious soft watches in reference to the theory of relativity which he was passionate about, Dali's works were full of metaphorical figures. His work was influenced by Surrealism and inhabited by science, history and religion. Developing it in many ways, Dali mixed with all of those who counted: Buñuel, Garcia Lorca, Picasso, Man Ray, Freud, Coco Chanel, Disney, Hitchcock and even Elvis.

But it was to the André Breton group that he owes his artistic identity like his muse, Gala. He met her in 1929 while she was married to Paul Eluard. He would never leave her, even when he was rejected by the Surrealists in 1938 for "glorification of Hitler's fascism". It was one of the scandals that made the myth of Salvador Dali - Avida Dollars according to the communist Breton's anagram, who condemned his passion for money.

Finally, this week in Paris, the ineffable Salvador Dali began illustrating a new edition of the late lamented Cervantes's Don Quichotte. At the Moulin de la Galette, in front of the doubles of the two main actors of the immortal epic, he traced the master lines of the future masterpiece, with help from his usual talismans, a rhinoceros horn and bread croutons, with an all-season car for the easel. We must not be mistaken: Salvador Dali's new work rests upon all cosmic concepts and fulfils all the requirements of his transcending paranoid reality. Moreover, Salvador Dali didn't stop there. He proceeded with the coronation of a Mrs. Goose bumps.
(Music)

Under the sign of the sea urchin, another theme of his planetary and pictorial philosophy, he put together the most neuralgic scratches to facilitate, on a stubborn breast, the birth of this sovereignty which we lacked, it must be stated. But Dali has provided it!
(Music)