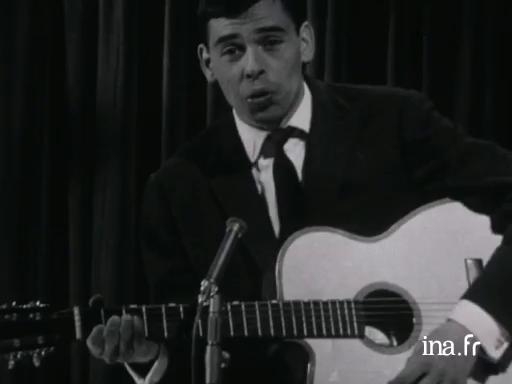 Jacques Brel talks about his career and how the themes of his songs have evolved between 1956 and 1963. He sings part of the following songs: Quand on n'a que l'Amour , La Valse à Mille Temps, Le Moribond, and Les Bigotes.

Born on 8 April 1929 in Schaebeek in Belgium, Jacques Brel started his author-composer-interpreter career in 1952 in tiny second zone Brussels cabarets. His style, which is lyrical, baroque and satirical, disconcerts, but Jacques Canetti notices him and brings him to Paris. A few hard years followed, during which Brel met François Rauber and Gérard Jouannest, who will remain his main collaborators throughout his career. He released his first album in 1955, and his second one, released in 1957, won the Académie Charles-Cros's Grand Prix du Disque and exposed him to the masses. His success had arrived and could not be denied. La Valse à Mille Temps, Ne me Quitte Pas (1959), Les Vieux (1963), Les Bonbons, Mathilde, Amsterdam (1964): Brel accumulates the hits, and being a true stage animal, his endless and triumphant tours wear him out.

That was in 1957, and I believe it was the first song that was lucky enough to more or less get hold of audiences.

In which way has your style evolved since 1957?

It has slightly evolved in all directions, first of all because we grow older, we search, we search. So there have been modifications. First, I rarely use the guitar. As a result, I hardly use a stool, and I try to relax, to also play a bit, musically speaking, and it gave results such as the Valse à Mille Temps.
(Music)

Afterwards, after this evolution, I remembered that I actually came from somewhere. We all come from somewhere, we all need to know, for some reason or another, that we have dirt under our shoes, and I actually remembered that I was a son of the Flandres, so it gave results that came from old colours that I remembered, colours of words, colours of music as well. It resulted in songs such as Les Flamandes, Le Plat and perhaps even like Le Moribond.
(Music)

You just gave us, right now, a panorama of your songs of recent years, 6 or 7 years I believe. How are things coming along today?