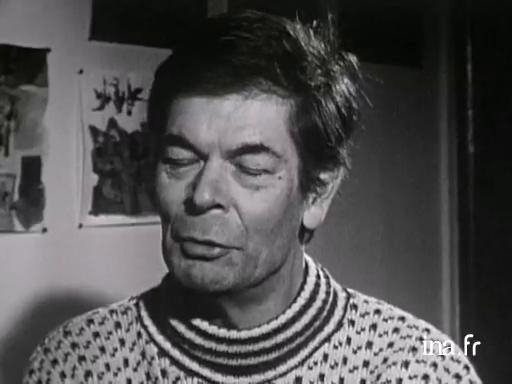 Roger Blin tells of how he met Samuel Beckett, and the numerous difficulties that he had to overcome to put on the piece Waiting for Godot, which finally went on show at the Babylon Theatre in 1953 thanks to the support of Jean-Marie Serreau and Georges Neveux.

Samuel Beckett, an Irish writer born in 1906, left his native country very early on to settle in France. An English lecturer at the Ecole Normale Supérieure, he mingled with Parisian literary circles and met, amongst other people, James Joyce. Between 1951 and 1953, he published three major novels, written in French, Molloy, Malone Dies and The Unnameable.

However, it was thanks to theatre that he gained fame, first through the 1953 play Waiting for Godot and then with his other plays, including Endgame (1957) and Happy Days (1963). In 1969, he received the Nobel Prize in Literature, which he considered to be a "catastrophe", because he firmly refused the adulation that surrounded his creations and he hated society gossip columns.

His works claimed to represent the Theatre of the Absurd, a literary movement whose birth he shared with Ionesco. Waiting for Godot, a dialogue between two tramps, Vladimir and Estragon waiting for Godot - who never shows up - symbolised a crisis of words, combining tragedy and comedy, similar to "Pensées de Pascal as played by the Fratellini brothers", as Anouilh would say. Beckett died in 1989, and was buried in Paris's Montparnasse cemetery.

I knew Samuel Beckett, personally, I believe in... 1950 I had known his play "waiting for Godot" for about a year, that is that I was at the Gaiete-Montparnasse and we had Strindberg's "Ghost Sonata". And in front of around fifty people, each evening, and there was someone who came twice, afterwards I found out that it was Samuel Beckett. And in the meantime, he passed his play to me, and I read it, I didn't understand it all of course, at first, but nevertheless I said to myself: this is something that we must put on. This is something extraordinary and it must be put on. I couldn't do it in my own theatre, my partners didn't want to at all, so I looked elsewhere. I did absolutely everything, most Paris theatres laughed in my face, and I knew Beckett, he didn't take part in my actions, he just followed them, and in the meantime one of his novels came out: Molloy. And nevertheless, in 53, well the end of 52, I took the play to the Babylone theatre managed by Serrau. He took it, the theatre was not well known, it was a little theatre set up by a very brave team, and Serreau said to me: that didn't go too well for us, but if we have to die, we'll die in beauty. And so, previously I had brought the play before the financial aid committee for first plays, and nobody had read it, nobody was interested. When I met Georges Neveux, I asked him if he had read the play. He said: no I haven't read it yet. I said: I beg you, read it, and the following day I received an enthusiastic letter which said: I will defend this play to the death. And thanks to him, he banged his fist on the table a bit, he stirred the other members of the committee who had not read it, who have perhaps never read it since, and he was able to give us a sort of grant of five hundred thousand old francs. Which allowed us to put on the play for a month, and then it continued afterwards and became an immediate success.