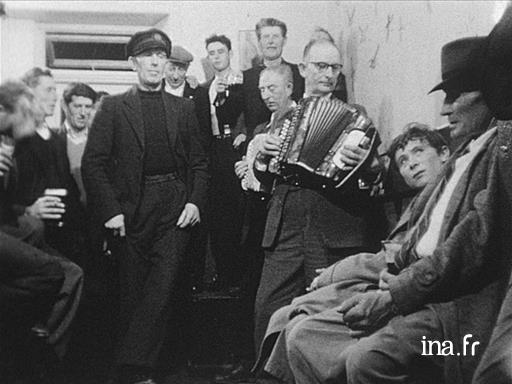 In a pub in Clifden in County Galway, Ireland, traditional dance is performed by a fisherman. A man dances alone to the sound of an accordion, surrounded by hid fellow men, with a glass of beer in his hand. The footwork is fast, accenting the rhythm of the music while the rest of the body does not move and is perfectly straight.

In a festive and timeless atmosphere, so reminiscent of the traditional pub, the ingredients are simple: an accordion, ale and men, in Clifden, on the edges of Connemara in County Galway (to the West of the country). And we are spectators of an interesting dance performance, close to the style "ar an sean nos" ("in the old style"), although the upright chest is somewhat indicative of the influence of competitive dance.

This expression, "ar an sean nos", was coined in the early 20th century, and originally only applied to Gaelic singing a cappella at competitions organized by the main Gaelic culture revival movement, the Gaelic League.

It was subsequently extended to include dance in the mid-1970s in Connemara, to describe a style that had been totally ignored by the Official Irish Dancing Commission: a style with fairly relaxed gestures, mainly of the upper body, which were truly distinct from the rigid postures that had been adopted in dance contests for decades, and still today.

Originally almost exclusively danced by men, who had mainly lived in the Connemara area, the "sean nos" is now taught across the globe to both men and women.

With its not so strict a posture as seen in "Irish tap dance", the upper body is usually even a little more relaxed than what we can see here. The steps themselves are usually less aerial than shown here, but the foot movements are full of rhythm and bounce. Not yet wearing their hard shoes (tap shoes), they beat the ground energetically. The "sean-nos" dance leaves so much more room for improvisation and the pure pleasure of dancing among friends than competitive dancing.

As can be seen in many extracts of the time, the montage has lost unfortunately the music that goes with the images, so we don't really know what music these men were dancing to. Finally, it is to be noted that women were totally absent from this area of musical conviviality, and that the only instruments used were accordions: progress has clearly been made in these two areas, as from the 1970s women were almost just as present as men, notably because there was a greater variety of instruments than in the 1960s.