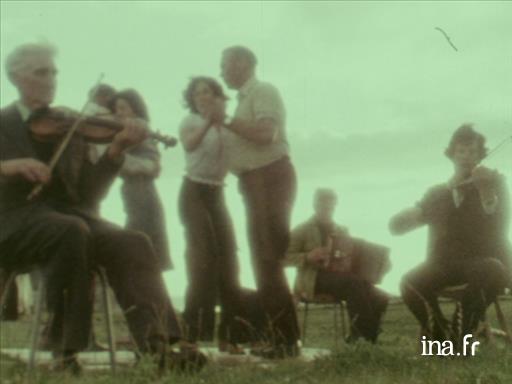 Extract showing an example of Irish dance: two couples performing a quadrille in a traditional setting (a dance floor set up outdoors with the musicians placed in the four corners).

Based on continental quadrilles (derived from French cotillion social dancing), Ireland developed a series of dance sets as early as the 1810s, with 5 or 6 figures with the help of dance masters: of the dozens of quadrilles in vogue at the time, a number became particularly popular and are still performed today using the same succession. The term «quadrille sets", which was the anglicized form of the French expression «suites de quadrilles», gave rise to the term set-dancing. A set is with 4 couples, and a half-set is with two couples, as can be seen in this extract.

In a similar fashion, the Irish dance masters were able to adapt the steps and figures to be used with Irish tunes, such as jigs, hornpipes, reels and slides. We know for example that from the 1840s onwards, the Bohemian polka was particularly appreciated in the Sliabh Luachra region, which straddles the counties of Cork, Limerick and Kerry, to the southwest of the country. In the northwest of the country, it was the mazurkas from Poland and the barn-dances from Scotland which took hold.

Unfortunately, set dancing was long considered a diabolical activity by the Catholic clergy, and banned by the Gaelic League. Here is what the leaders of Irish Catholic Church wrote about it in 1927: "Evil forever casts its nets under unwary feet. Today, the innocent have essentially fallen victim to dance halls, bad books, indecent magazines, films, women's immodest fashion - and everything that tends to destroy the virtues of our people's character. In 1935, under religious pressure, the Government voted in the Dance Hall Act, requiring every organizer of dance evenings to have a licence, something that only halls managed by the Church had. This spelled the end to evening dances between friends as well as to dance events held at the crossroads of villages, which were so popular up to then. Gradually, the musicians had to put away their instruments, or emigrate.

This clip shows a half-set (two couples only), in an unusual setting where the musicians are placed in the 4 corners of the dance floor, which of course is not at all commonplace in Ireland. Conversely, it should be noted that the taps can be heard especially well in the recording, which is fairly representative of the best recordings of dance in Ireland.