The history of maloya 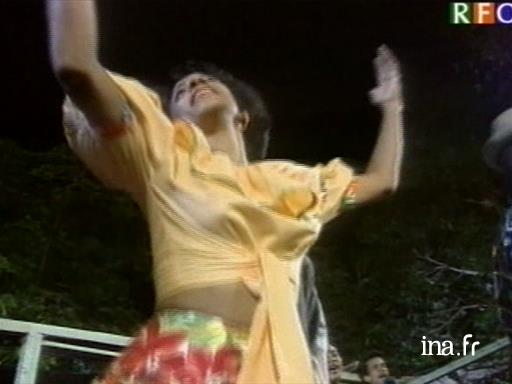 Presentation of Maloya, a traditional music native to Réunion Island. It is often compared to the blues, and after being censored for many years, it was only officially recognized in 1981. Clips of dancers and singers giving their renditions of rhythms that originated in slavery.

In Réunion Island, Maloya can be seen and heard in three social settings [3]: in the servis kabaré (ritual commemoration in honour of the ancestors of African-Madagascan origin), in Lakour where the event is called kabar and is organized in people's courtyards or in a public area (around a bonfire on the beach, or behind factories) and su podium, i.e. on very high stages to an audience who often has to pay to enter.

The rules of three social settings, which reflect ways of behaving and conducting relationships with other participants, are implicitly defined and well-known to the regulars.

A kabar on Réunion Island therefore refers to a gathering of people who intend to play and dance maloya. It is during these gatherings that the oldest members teach the young, giving them an opportunity to learn how to sing maloya.

Here we can see Gautam Barivoitse aka Lo Rwa Kaf, king of the cafres (cafre meaning a black person of African-Madagascan origin in Réunion) singing a maloya in a kabar at somebody's home in 2012. These kabars are organized in people's homes for family celebrations, end-of-year celebrations and other festive events

Lo Rwa Kaf is one of the pillars of Maloya culture, alongside Jules Manent aka Gramoun Bébé and Julien Phileas aka Gramoun Lélé, not forgetting Gramoun Baba and his wife Marie Marte Bazaline. These singers of maloya, now deceased, left behind a large legacy, and nearly all of these cultural figures are considered holders of traditional knowledge about maloya from the servis kabaré. Thus, for many the servis kabaré is perceived as the conservatoire for maloya.

Gautam Barivatse, Lo Rwa Kaf, was a maloya musician, singer and storyteller. He was among those who helped to perpetuate maloya tradition in Réunion during a period where this music and dance were banned, albeit not officially, on the island. In the 1970s, it was actually common to see maloya instruments confiscated and their practitioners fined. The music was decreed as being subversive, which is why maloya is somewhat less known to the general public. But for purists it is a one of the veritable pillars of Réunionese culture. Lo Rwa Kaf recorded two albums: Somin galisé in 1992 and Tradition maloya in 1997.

Since 1981, the return to power of the left gave maloya back its total freedom of expression. However, this was still not sufficient for it to be broadcast on the radio, which was also supposed to be unrestricted. Maloya slowly regained its former nobility. Today, it is played not only in all the concert halls and stages on the island but also across the globe. From Gramoun Lele, who played in Quebec, Africa, and New Caledonia, to more recent groups like Lindigo, Urbain Phileas (son of Gramoun Lele), maloya is successfully being exported and is widely enjoyed by audiences everwhere. In 2010, Danyel Waro the cantor of maloya par excellence was presented with the Womex award; the greatest distinction that can be won for world music. True poet of a creole language that he largely helped to revitalize beyond the border of his birth country, Danyel Waro has inspired a new generation of musicians, including Zanmari Bare, and Jean Didier Hoareau.

Maloya, which is today a vehicule for Réunionese folklore, was born far away from the sun and colours of the Island. Uprooted individuals came together around sugar factories to quench their need for human communication and cultural ties. In this instance, the lyrics, which mull over the pain of exile, evoke other emotions than joy and having a good time
(Music)

These men and women of the 19th century, who were forced to shut up and accept the laws of the masters, the farm owners, developed a music that is often compared to the blues of the black Americans.
(Music)

Through their lyrics, which were beyond the understanding of their supervisors, they perpetuated an oral tradition.
(Music)

The jingling of pikèrs (bamboo that was hit with two wooden drumsticks), the beat of the roulèrs (a type of drum hit with both hands) haunted the air surrounding the huts where the slaves lived.
(Music)

But it was to take more than a hundred years before these cries of the night would overcome the administrative veto and allow them to be heard on the stage.
(Music)

The two albums by Firmin Viry, recorded in the early 1970s, were a first step on the road to official recognition of maloya in 1981, a year where the [fonds de kever] composed of Danyel Waro, Gilbert Pounia, Thierry Gauliris took up the torch of their ancestors to carry the flame of their Réunionese music across the globe.