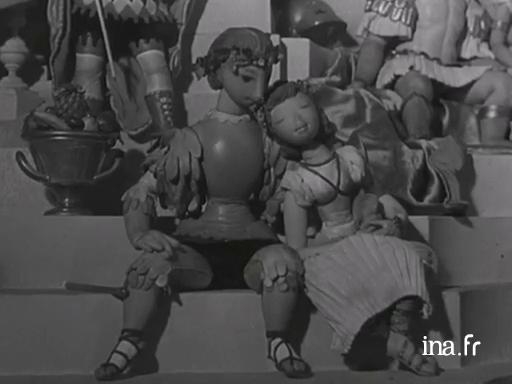 Even though Jiri Trnka (1912-1969), trained at the Prague School of Arts and Crafts, and rightly seen as the all-time greatest creator of puppet films, the Czech artist was also a renowned painter, a successful illustrator and an experienced stage set creator. He made his first films in 1945, when he first became interested in animation (Grandfather Plants a Beet), but his passion for theatre animation naturally led him to shoot wooden actors, which he had managed a troupe of prior to the war.

Feature length films then follow, with productions covering working-class traditions and national heroes, with The Czech Year (1947), Prince Bayaya (1950), Old Czech Legends (1952) and ?vejk the Brave Soldier (1955). Trnka's greatest success nevertheless remains Shakespeare's A Midsummer Night's Dream, which was presented in Cannes in 1959, which made him the icon of "Eastern country" animators.

Afterwards, the filmmaker stopped making feature length films in favour of short fables in tune with current times, such as The Cybernetic Grandma in 1962 and The Hand in 1965.

This Little World comes to life each day in the studios of Prague.
(Music)

There, under Trnka's impulse, are created, outline by outline and face by face, the characters of the heroic or burlesque drama that follows its author step by step.
(Music)

Painstaking work, slow and almost tiresome. Each image (and there are 24 images per second) requires an infinitesimal modification of the character's attitude. It's a joy when there's only one of them on stage! Here on screen will be displayed, in a short while, the legendary figurine that will transport children and adults to the kingdom of dreams.
(Music)