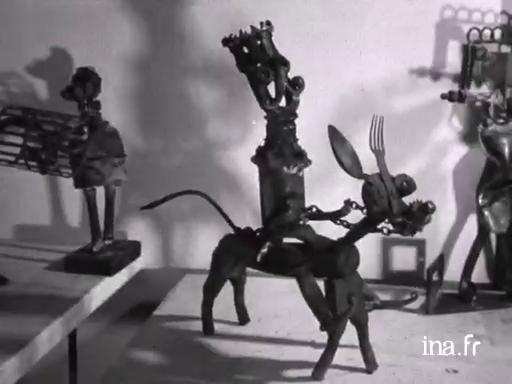 Presentation of Robert Jacobsen, at work in his studio, and his works.

Born in Copenhagen in 1912, Robert Jacobsen is the leading figure of modern Danish sculpture. Yet he didn't come to art directly, having several unusual jobs in his youth from sailor to banjo player. He began sculpting wood and stone at the beginning of the 1930s, without any special training. His first works were inspired by legendary Scandinavian fantasy creatures, but his work soon evolved towards abstraction and constructivism. This movement, in which were Mondrian, Kandinsky, Klee or Le Corbusier, aimed beyond aesthetic renewal to construct a modern society. He developed on the basics of cubism and futurism and exclusively used geometric elements, symbols of technical progress.

During the war, Jacobsen joined a collective of artists gathered around Asger Jorn, the Danish communist painter who would later be one of the founders of CoBrA. In 1947 he reached Paris where he developed his own forms, curved iron strips and planes which seriously highlighted the void. In the 1950s, the artist would produce a gallery of characters from soldered metal debris, inspired by African art that he collected. It was during this period that the Actualités Françaises made famous in their report. Robert Jacobsen died in Denmark in 1993, where he had designed several monumental pieces, often on public commission.

Strange is a good way to describe this man's occupation since it's not a hobby. An unknown sculptor who's now based in Paris, Robert Jacobsen was inspired, one day, by the strange foreign aspect of a metal object, and welded it to others to make an equally strange character for his little girl to play with. Since then, he continues, welding bicycle chains, bolts, toothed wheels and exhaust pipes together following his inspiration. Is this art? Is this something else? In any case, it's strange.