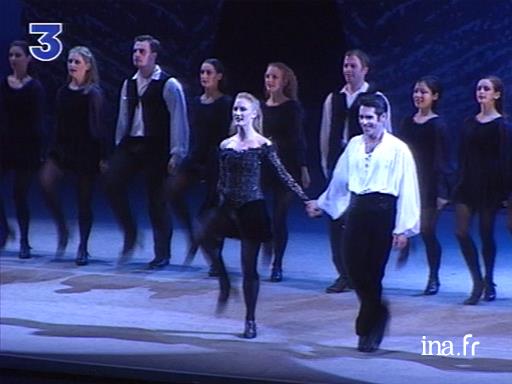 Riverdance, the international Irish dance company is on tour in France. Riverdance is a mixture of modernised Irish folk, with dancers who click their soles.

The 30th April 1994 was a historic night in Ireland: not happy with winning the Eurovision Song context for the 3rd time running, Ireland performed one of the most memorable dance routines in the history of the competition. It was not strictly speaking anything really new, as the idea came from a similar performance called "Timedance" - also a composition by Bill Whelan - performed for Eurovision in 1981 by the group Planxty.

For the 1994 contest, they decided to combine traditional musicians with the national Irish Radio-Television Orchestra and the Anuna choir, performing compositions by Bill Whelan. The reaction of the room, the commentary by the presenters Gerry Ryan and Cynthia Ní Mhurchú, as well as the French commentary by Patrice Laffont, left no doubt as to the audience's immediate enthusiasm, which perhaps had an influence on Ireland's victory that night.

With Riverdance, we find ourselves at a crossroads between competitive dancing and a public show. While the technique is relatively well-defined in terms of its lines, moves, rhythm and posture, Michael Flatley was able to skillfully stage this unique form of dance, and even turn it into a new genre, i.e."Riverdancing".

Before the triumph of this choreographic and musical performance, it had been decided to develop the idea around the personalities of Michael Flatley (choreographer and main dancer), and John Butler (1st dancer), as well as music arranged by Bill Whelan. The success of the performance Riverdance from 1995 onwards, not only in Ireland but also in the United States and the four corners of the word, was simply phenomenal. And, not surprisingly, much of the performance saw the coming together of Irish dancers and African American dancers.

In 1999, Riverdance began a tour in France, with Joanne Doyle and Breandán de Gallai as the leading dancers in the dance troupe. For them "Riverdance is a journey [...]» Irish dance has developed, imbued with elements of many other dances, in a world where borders are constantly being pushed back".

Most of the dancers who were present at the Eurovision Song Contest in 1994 are still active today and help ensure and pass on the standards of Irish dance. Thanks to the immediate success of Riverdance, we quickly left behind the teaching of dance that had hitherto been done in isolation, traditionally limited to English-speaking countries, to see schools open their doors everywhere on the planet: throughout Europe, including Eastern Europe, Russia, Japan, Brazil..., and France, which after an initial tepid interest for this type of dance and teaching, began to embrace this art.

A few pioneers of Riverdance are now dance masters today: like in the 18th century in Ireland, they are very much attached to the social side of the dance, they move around the world to teach their art and are speakers at international level. These include Breandán de Gallai and Ronan McCormack, two of today's most popular dance masters.