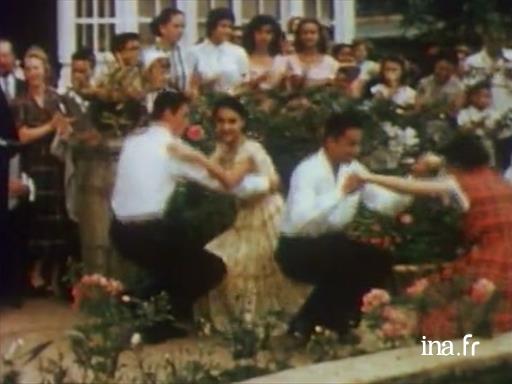 In front of a creole House, a group of Reunionese inhabitants dance the island’s traditional beat, known as sega.

This video filmed in the 1950s shows a sega being danced. The dancers stand around a fountain, performing different figures one after the other by turning around the fountain in a clockwise direction. For the figures, the dancers rotate their pelvis continuously. Here is a clear example of the creolization of European dances. Many aspects are indicative of a europeanized sega: the way the dance in organized, the way it develops in relation to the space and the successive performing of different figures. The instruments used and the musical techniques denote practices that emerged between the end of the 19th and the beginning of the 20th century.

We are certainly far from the descriptions of sega from the 18th century. The sega danced on Reunion Island in the 1950s was no longer the old dance where a couple could be seen moving about energetically in the middle of a circle, revealing a dramaturgy where the dancers move away from each other, come back together, turn around, and lightly brush against each other without ever actually establishing contact. The sega in the 1950s, which was often performed in front of historic sites such as the Museum Léon Dierx, was shown a certain distinction and could often be seen officially in large formal gatherings.

Reunionese sega is danced in couples, standing face to face, with the man holding his partner’s left hand, and placing his right hand on her waist or shoulder. The steps they perform are taken from the original corpus for the dance, including the radencé, the roulé, the piqué, the terre à terre, the dos à dos, the chaloupé (descriptions of sega dance from the 1950s have been published in a book entitled Le séga réunionnais (Reunionese Sega) Compères créoles. June 2015).

The curator of the Léon Dierx Museum invited us to hear a performance of the sega, danced in front of a creole House. The music, the rhythm, the decor, are part of the Réunionese folklore.
(Music)

It is an opportunity for us to get to know young people who we meet on our tour.
(Music)