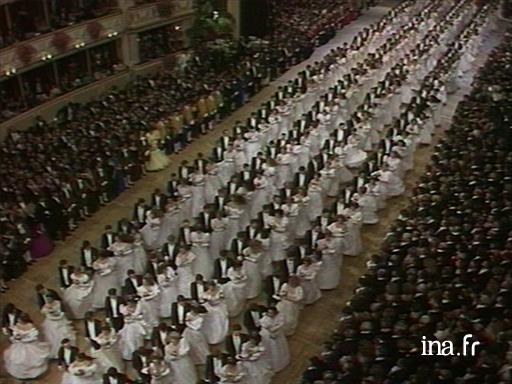 Like every year, in Vienna, the debutantes ball gives young people of the high society the opportunity to make their official entrance into the world. We follow Catherina and Barbara preparing for this sumptuous evening. The organizer of the event explains how the male dancers and their partners are chosen. The dance teacher, during rehearsals of the waltz and the bow and the curtsy, explains the importance of learning etiquette in such a society.

The jury is still out on where the waltz was born. Some still defend its Italian origin. In the ballo liscio (the equivalent of the French danses musettes or retro dances), we indeed find the waltz, polka and mazurka. But the Viennese also claim to have begotten the Waltz, as well as the Germans and the French! Today, the Viennese Waltz is called a quick Waltz with its large elegant strides across the floor of large ballrooms, like at the Debutantes ball which takes place every year in Vienna. As was the case in France in the past, knowing how to dance is still part of European savoir-vivre and etiquette, especially in Austria and Germany, just as dressage or fencing used to be.

At the beginning of the 19th century, the institutionalization of the waltz was already a revolution. Indeed, unlike like previous types of ballroom dancing, the couple could swirl around as they wanted surrounded by other couples, and it was at times difficult to follow. The couple could easily disappear for a few minutes in a small room to isolate themselves, and then reappear a few minutes later without anyone noticing.

Moreover, the twirling couple itself could share their secrets of love. Elegant and intimate seductions could take place, eluding the control of society, in particular the couple's parents. You just need to watch how difficult it is, for example in films, to follow the dialogue of a couple dancing the waltz. In the film My Fair Lady, during the grand ball, the couples converse, exchanging words of lovers and other important dialogue. For the camera and the viewers to be able to closely follow the story that was unfolding during the dance, the spinning Waltz had be transformed into a collection of mere swaying moves.

This revolution was so strong for French society that it occasioned much discussion and disputes. Some claimed that this way of turning, quickly and over extended periods, was intoxicating to the women dancing, and that men was taking advantage of them by carrying them off in such dangerous whirls. A male expression of the time is still famous today: «I will never marry a young girl who has already danced the waltz!».

But, gradually, knowing how to dance the waltz became an obligation in high society culture. According to another famous anecdote, at a ball, a lady of a certain age, invited by a young man who was ardent and passionate about the waltz gave him this piece of advice while they were dancing: «young man, if you like the waltz so much, then maybe now is the time to learn how to dance it!.

In this video, watch the wonderful «square», movement, which is explained very well by the couples' teacher (" Eins, zwei, drei, vier, fünf, sechs ») at what is one of three of the most famous dance schools in Vienna, the Elmayer school: it is a perfect illustration of the square movement with a 2 x 3 step system, thereby allowing the dancers to turn easily.

But the waltz traveled, firstly because music played in triple time was cultivated all over the world, and the rotation movement fits perfectly well with the triple time signature on a bio-mechanical level. It is a logical system. We therefore find English waltzes, American waltzes, Mexican waltzes, and Brazilian waltzes... Note also the Boston waltz, which is a slow waltz that allowed new figures to be added, and which on its return to Europe in the early 20th century enraged dance instructors because, according to them, too many people would start "bostonizing" all the dances, i.e. inventing new figures. Nothing would by respected anymore...! Even now! Even the waltz!

One fact is worth noting: Argentine composers created sublime Argentine waltzes. But, unlike Europeans, it did not cross the mind of Argentinians to dance to these beautiful triple-time melodies. Enamored with the tango in all its forms, they walked and danced the tango to this triple-time music, as if they were no longer dancing to the tempo, but to the meter. The effect is very beautiful, amazing for a European to hear, and most of the time, it produced beautiful results. This too is an extraordinary fusion to come about after exchanges between Europe and Argentina.

Well, when you live in Vienna and when you are Austrian, there is only one way of thinking about it, of course, it’s the Waltz. A little like dubbing, i.e. when knights were dubbed. And then, every year in February, a major event- an institution- takes place, the Debutantes’ Ball. You need to let yourself be swept by the poetry of what you are going to see, thanks to Elisabeth Cooper and Laurent Champenois who met with two of these girls, young debutantes, a few days before the big moment.
(Music)

They are called Catarina and Barbara. In a few days, these two students will make their official debut into Viennese society, at the Opera Ball.
(Music)

Among hundreds of Austrian youthes, Catarina and Barbara have been chosen for their grace and their command of the waltz.
(Music)

Of the 800 couples who come to the opening, I can only retain 190. There is, of course, many children of celebrities and diplomats, as well as foreigners to whom we give preferential treatment a little. All candidates must be available for the whole week before the ball to train to ensure they know how to perfectly dance the left-hand waltz. Moreover, I remember a mother who was frantic when she noticed that her daughter had lost four kilos in five days!
(Noise)

For a century, the Elmayer school, has been teaching beginners bows, polka and the left-hand Waltz
(Noise)
(Music)

Here, we really learn what we call “for life”, something that you may have afterwards, which is very useful in social life. It’s is not only the dance that is very important here in Austria, but also etiquette.
(Noise)
(Music)

Wearing tails and an evening dress is compulsory at the Opera Ball. For Catarina and Barbara, who are beginners, the etiquette is strict, the dress will have to be white.
(Music)
(Noise)

In the hall where people usually sing Mozart and Verdi, the city’s largest dance floor has been set up for one night. The dream is being made a reality
(Noise)

A famous German poet once said: "It’s not only children who revel in fairy tales. Everyone needs wonderful stories". Well, that’s what the Opera Ball is all about, and nothing else, it has very little to do with reality. It is a fairy tale.
(Music)
(Noise)
(Music)

The Opera Ball is, of course, what we call high society, but 7,000 persons will be attending the night of the ball, and forgive me for saying so, but I do not believe that there are 7,000 elegant people in the world!
(Noise)

Each box costs 80,000 Francs. There are people who buy tickets at 200 Francs, which allows them to watch the ball. They are seated high up in the gallery, but they are not allowed to come down to dance, they must settle for just watching. Of course, many try to sneak down as it is much more exciting to be on the dance floor.
(Music)

For me, who was born in Vienna, to attend the Opera Ball, is part of the “game”. It's wonderful to open the ball in a long white dress. It is like a game to me, like a fairy tale and I will remember it my whole life.
(Music)
(Noise)
(Music)
(Noise)

Everyone dances the waltz!
(Music)

In this fairy-tale ball, beginners are princesses for just one night.
(Music)

Other girls like Catarina, and Barbara will live this instant next year, in this magical place, where the pomp of the Empire is recreated for an evening.
(Noise)

Christmas in Vienna, the French quadrille