Christmas in Vienna, the French quadrille 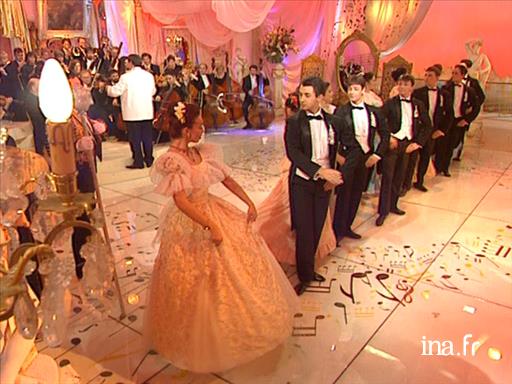 Discovered in England by the dance masters of France's Sun King, they were also danced at balls throughout the 18th century. Then, in the middle of the 19th century, they gave rise to the quadrilles. We say the quadrilles, plural, because there were several of them, the best known being the Lancers Quadrille, although the first was, apparently, the French Quadrille. But there were also the Waltz Quadrille, the Quadrille des Variétés (a very original ensemble created by the famous teachers of the time, taking the best figures and steps from the different quadrilles known at the time).

All the French quadrilles, so one of the first types, are highly structured and are usually danced in the same way. But there is no obligation to do so, which can be seen in the video clip associated with this text. It should be noted that the style adopted for this rendition is a traditional one, and not one commonly used by the people. It has five 'figures', which are: Le Pantalon (Trousers), L'été (Summer), La Poule (The He") La Pastourelle (The Shepherd Girl) and the Finale And each figure is itself divided into "dance steps". For example, in Le Pantalon, we find the chains, tours à deux mains, the ladys' chain, demi-queues du chat, en-avant deux, en-avant trois, etc...

A progression can also be observed with respect to this structure: in le Pantalon (a name that alludes to the "Sans-culottes of the French Revolution"), the men only dance with their own partner. In the second figure, l'été, the man has the opportunity to do a few steps with the partner of the couple in front of him. In la poule, couples dance and exchange partners in pairs. In the pastourelle, each man has the opportunity to dance with two women (major progress!). Finally, in the Finale which is usually very fast, and full of joy and spirit. The couples disappear from the room, wildly and quickly moving across the floor in all directions.

In addition to these forms, figures and dance steps, which make up the requirements to be able to take part in this type of dance, there is also the aboyeur, the caller: the dance master who calls out the names of each figure, as you'll be able to see in the video clip.

But it is also possible to make up the sequence of figures on the spot. In this case, the dance is created live, and is constantly renewed. Needless to say that in this case the music is also chosen, and performed live and perfectly in keeping with the rhythm needed for the dance steps requested (rhythm of the waltz, polka, gallop, or other). The caller must also possess a very refined skill in terms of all of what is possible and all what is not possible, so that all dancers end up in their starting position at the end of the perfectly orchestrated song. Suffice to say: it often presents a challenge.

These contradances and these quadrilles were obviously exported first by the aristocracy and gentry, in particular by French colonizers. For example, the French settlers in Santo Domingo brought these cultures with them and danced as a means of enjoyment to brighten up their evenings and also to "faire société", in front of their servants. Driven out of Saint-Domingue at the beginning in 1806, the French and their dances emigrated to the east of Cuba, and were adopted by Cubans who practiced them as a way of imitating their white masters.

The quadrilles were in reality "social dances" par excellence, which explains why they were so widely exported.