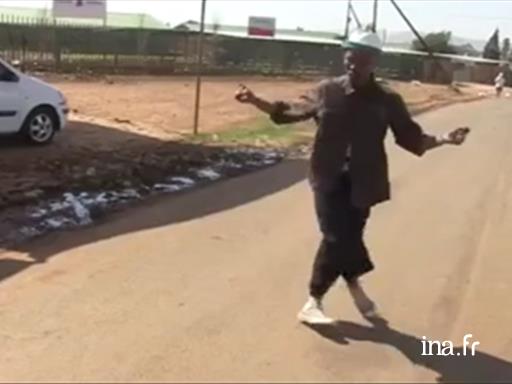 The dance group is helping to ensure that the culture of the pantsula dance continues to live on. In many respects, the dance resembles American hip-hop and emerged in s similar way, in the 1980s. It originated in the street, it has its own language, music and dress codes. Pantsula dancing was banned during the Apartheid. This however just increased its popularity in the townships.

Pantsula is a popular dance which originated in the suburbs of Johannesburg; its development goes alongside the contemporary history of South Africa. It was the very embodiment of the institutionalization of customary racial segregation, established in 1949 and abolished in 1991, known as Apartheid. This system allowed a white minority to lead and monopolize the wealth of one of the richest countries on the continent, by excluding its black population from the democratic process and the country's economic development.

Pantsula, which in Zulu means "to waddle like a duck", refers to a foot movement ("flat-footed, with the heel firmly fixed on the ground), one of the features of this dance. The dance first appeared in the organized crime areas of the townships in the fifties, the institutionalized ghettos where black populations were moved in order to clear areas for whites. Since its first appearance, it has now become an integral part of a popular landscape distinguished by other local, foreign, "traditional" or "modern" dances and music, which would influence Pantsula throughout its development: The Maribi (South African style at the beginning of the century), Monkey Jive (local version of American Jive), Lesotho dancing, Gumboot dancing and the dances of South African miners, etc.

It was in the 1980s that this dance really gained popularity and spread to all South African cities. The fact that the same decade saw the creation of a new national musical style, the Kwaito, which was quickly associated with the Pantsula perhaps helps to explain its popularity. Apartheid was seeing its last years. It was increasingly coming under fire, both internationally and at home. This situation promoted the popularity of the dance, which was full of meaning for black South Africans. In 1994, after the first universal elections in South Africa were held, the Pantsula continued to live on. It left the townships, spreading out across the country. It became institutionalized like Impilo Mapantsula, which became a dance company.

Although it can be practiced alone, the Pantsula is a social urban dance. It allows initiates to use their body to express what they did not have the right to say or what they could not say in the oppressive context of Apartheid. It allows people to talk about daily life in the townships, the joys and the woes of the inhabitants. Today, it depicts the contemporary South Africa, the "Rainbow country», which is not prepared to forget some of its darker periods of history.

Its history dates back to the 1950s but the moment when...pentsula became famous was in the 1980s. When most of the groups were formed. But its history dates back to the 1950s. At the time there were other dances: marabi, monkey jive, tsaba-tsaba, and pepezela... There are two categories in Pantsula dance: solo and group choreography. In our language, solo is called "fukusa". It is freestyle but with music. As for group choreography, it is especially influenced by dances indigenous to Africa. It is important to experience many dances before choosing one. I myself fell in love with pantsula.
(Music)

I have been dancing since 1994, the year South Africa got its independence. It was difficult because of the oppressive system, when police officers at the time saw us together on a street corner, they took us for thugs. They did not want people to gather in groups, especially friends. People mainly danced in local clubs, the stokvels, and the shebeens. At the time, I was too small to get into the shebeens. We danced in the street, and at concerts, but it was difficult because of the political system at that time.
(Music)

Children danced to tell others about what was happening at school, where there was corporal punishment. We made a sort of "sketch", you know like a drawing. These "sketches" illustrated the life of the community. They related what we were experiencing at school. For example, if we had been subjected to corporal punishment. We used dance to communicate. We also tell nice stories, like going to the hairdresser: How would you like your hair cut? A little massage? We tell wonderful stories about new South Africa. It became the rainbow nation. Then, we were not allowed to mix with other races. Now we can use dance to show the beauty of our country. The diversity of South Africa.