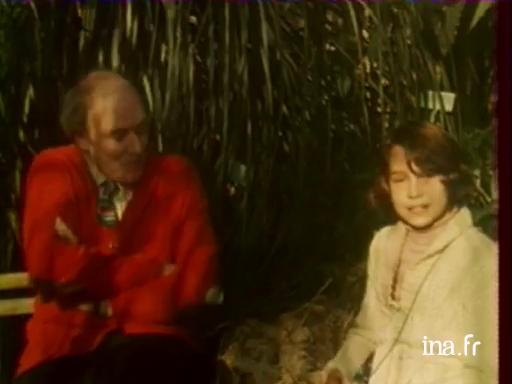 Interview with Roald Dahl by a young Franco-American reader. The author discusses the characters of his novels, children, the adventures he writes?

Roald Dahl (1916-1990), a writer born in Wales to Norwegian parents, lived a childhood marked by painful events: he lost his older sister and his father when he was very young. He enlisted in the air force as a fighter pilot in World War II. Encouraged by writer C. S. Forester, he started writing in 1942.

He published The Gremlins in 1943, which greatly inspired Joe Dante for his film 40 years later. Originally, the film was to be produced by Disney. A few of Dahl's short stories, published in the Kiss Kiss and Bizarre, Bizarre (1960) collections, and characterised by a heavy cloud of suspense, were later adapted to film by Alfred Hitchcock.

However, it was with children's novels that he found the most success, most notably with his novels James and the Giant Peach (1961), Charlie and the Chocolate Factory (1964) and even The Witches (1983). These novels depicted a marvellous world, full of imaginary elements but never sugar-coated, so that young readers could draw concrete information from then and benefit from true reading pleasure.

Almost all of them were just straight out of his mind. And even if he likes kids, even if he thinks they're something wonderful, that they're not like... it's something completely different from adults. [English]

He thinks that children are funnier and that they laugh at funny stories and that they're a bit funnier, you know. Now, in his books, if he wrote the adventures, if he did the same when he was a child, if he's the one who... who lived them and he wanted to talk about them, then he wrote about it in his books. [English]

No, it was really made up and he thinks that it was just like that, and it wasn't at all like that when he was little.

They are too extraordinary to be true, so you can't really... I mean, you can imagine it, but it can't really happen. [English]

[English] It was a great pleasure to go... [English]

To have come to France.

To have come to France to speak with you. [English]