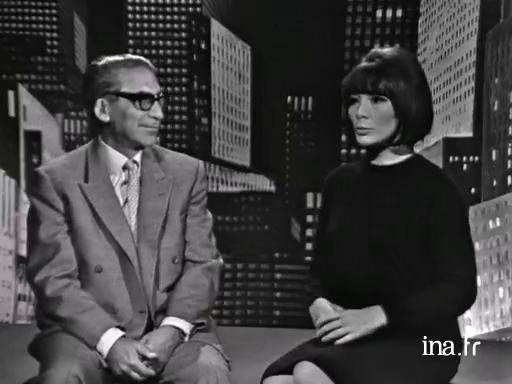 Joseph Kosma and Juliette Gréco met on a television set. They talk about their meeting provoked by Juliette Gréco who offered to Joseph Kosma to put Queneau (Si tu t'imagines), Sartre (Rue des blancs manteaux) and Desnos (La Fourmi) texts to music, and their long collaboration that followed. Gréco remembers the importance of the song Les feuilles mortes in his international career.

A conductor for the Berlin Opera during the 1920s, a partner of avant-garde artists such as Hanns Eisler, Kurt Weill and even Bertolt Brecht, with whom he shares both aesthetic and political beliefs - Joseph Kosma, born in Budapest, in Hungary, on 29 October 1905, is already a solid musician when he finds refuge in Paris in 1933 following the Nazi rise to power.

He meets the poet Jacques Prévert there in 1934 and starts a collaboration with him that will give birth to over 80 songs, from which several are masterpieces that immediately became part of the nation's patrimony (Les Feuilles Mortes, Barbara, En Sortant de l'Ecole). His songs having been sung by the biggest names in French variety music (Mouloudji, Juliette Gréco, Yves Montand), Kosma became, in a few years, poets' favourite musician (Desnos, Queneau) and he laid the stylistic foundations of intellectual left-bank variety music, which was both sophisticated and mass-appealing.

I'm happy to see you, it's been a long time since we've last seen each other. That's true, we never see each other.

I think that I hear you often.

I sing your songs but you don't see me.

Do you remember the first time we met?

I remember very well, it was during the summer, it was summertime and the weather was beautiful.

Yes, but I'm not talking about that, there were lyrics to songs that you brought me, songs, well, Quesnau's very pretty poems, "Si Tu t'Imagines". Sartre...

The street of the white coats

The street of the white coats, and then,

I have... Well, if you want a reminder, you made them for me in 24 hours. You really inspired me, you know.

I don't know if I inspired you, in any case, the lyrics inspired you, you wrote them in 24 hours, that's nevertheless an amazing record. And when I got to your home and I heard the music, I was quite surprised, because, I obviously didn't know how to read music at all, and you had to explain everything to me. Do you remember that you were the one who taught me how to sing my first songs?

We worked a lot.

My, how intelligent it's become in your interpretation of it.

It's thanks to you that my songs...

We still worked a bit, you know! What did we do aside from that?

Moreover, I think that you've changed the face of the song, because you always choose to use poetry.

You exist and that's enough...

Thank you very much! What did we do? We did lots of silly things afterwards, we sang lots of things, and then one day...

Yes, yes, oh, lots of silly things, oh my god, day by day, to the night the night, everything, everything, everything, I am the way that I am, everything. And then one day, I was asked to leave, they asked me to go abroad. It bothered me a bit. I was a bit bothered, I didn't know about singing abroad, they asked me to go to New York. To New York. I lived very far from New York, and I really wondered what it looked like. And they told me: ok, you're going to go to New York, and we want you to sing "Les Feuilles Mortes". "Les Feuilles Mortes", for me, it's a bit like a passport to the entire world. And you're the one who gave me this passport, and this passport, the first stamp, it's there.