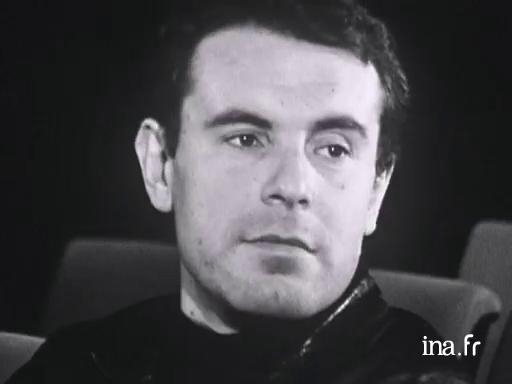 On his way through Paris, Henry Chapier met Milos Forman in a cinema theatre in the Latin quarter. Following a brief portrait of the filmmaker who was then at the start of his career, Forman explained how he began in the cinema, his reasons for choosing amateur actors in L'as de pic and Les amours d'une blonde. He talks about his favourite filmmakers, his relationship to the Italian neorealist cinema and the use of music in his films.

Czech filmmaker Milo? Forman was 34 years old in 1966 when The Ace of Spades (1963) came out in his country, and with Loves of a Blonde (1965) he comes across as the leader of a local "new wave", which other directors such as Vera Chytilová and Jaromil Jire? participate in: freedom in tone, humour and a taste for satiric realism - which recalls a form of "cinema-vérité" - remind the former Prague cinema school student of Godard, Chabrol and Rivette's first fiction stories. Forman's films, written with Ivan Passer, describe generational conflicts and fight the prevailing conformism in their own way.

A forerunner of the spirit of the Prague Spring, Forman will only shoot one final film in his country - the symbolic The Firemen's Ball in 1967 - before being forced into exile in 1968. Since then, he pursued a remarkable career in the United States, where he became a naturalised citizen in 1977. His record includes such noteworthy works such as One Flew Over the Cuckoo's Nest (1975), Hair (1979), Amadeus (1984) and Man on the Moon (1999).

Milos Forman, the young Czech filmmaker, has come to Paris for 24 hours. It made sense to go and find him in the Latin Quarter. Before meeting his public there, he found the place to have a familiar atmosphere, similar to his films, to his adolescence, to the youthful dreams of a 20 year old in Prague, Paris or wherever, "Ace of spades", "Loves of a blonde", 2 film titles which meant nothing to the French only 6 months ago. They have scarcely been out of the spotlight since. Surprisingly we discover new Czech cinema which strangely resembles our own.
(Silence)

Milos Forman, how did you get into cinema?

Well, I, I started thinking about cinema when I was 13, 14, 15 years old, and at that time, I always wanted to marry the female leads that I saw on the screen. Such as Rita Hayworth, Michele Morgan, Danielle Darrieux, and I thought that was the way to do it as even their detractors manage it. So I started acting, but after a few years, I realised that I had to direct.

Did you manage to marry a star?

No, no, I always married very normal young women, I always made their first films, they become stars in my country, and left me for actors of course.

In your films, one has the impression that you mainly use non-professional actors? The 2 young actors, the one in "ace of spades", the young boy who is the hero in "ace of spades" and the young girl in "Loves of a blonde", do not seem to be well-known actors, is that so? Am I wrong?

You'll make, you make your first films and they are scared that you are going to ruin it, and they'll direct you... They have no confidence in you...

All in all, in your two films, that we've been able to see in France, you deal with the problems of adolescence. Do your films relate to memories from that period or does conflict between generations interest you, as an issue?

Well I love, adolescence is a great age, it's an age during which the, the...it's a terrible word in French, distance, the difference, the difference between experiences and ideals, this difference is the most passionate, the most touching at this age. And yet if there is a relationship between generations, I think there is a bit of a crisis in the relationship between sons and fathers, today. That if the relationship is better then, we, the adults, I think that we are a bit more guilty than others in general, it's still no better.

Tell me, Milos Forman, who are your favourite filmmakers? Let's start with modern filmmakers if you would?

No, French, Italian, Russian, as you wish. I would like to know a bit a about who the filmmakers are that you prefer or that you love even, without so much preferring them to others.

Well I like a lot of directors, but I prefer for example, Jean Vigo, I adore him, he's a modern genius as far as I'm concerned. I like Renoir a lot, I like the new wave of French directors, but not all of them, I like Truffaut and Godard, and I also like the English filmmakers a lot.

Some people have found your films to contain a bit of Italian neo-realism due to their documentary-type style. Do you agree with this definition of neo-realism?

Well, I, I, I used to love Italian neorealist films, they have the same style as documentary films, but I think neorealist films are films which have a message, and I prefer films from the heart.

There is something very original about your film, that's that the soundtrack, or the music, triggers the shot. Usually, the music accompanies a shot, so it has no real use, but with you it precedes the shot, and sets the tone.

Yes, I love to use music which has already been composed, for film. I don't like music which has been composed especially for film very much, and these are the reasons, if I already have the music before shooting, I can allow myself to be prompted by the music, I can listen to it every day. And the second reason is that it is very unattractive, it's the enfant terrible for composers, usually they compose better stuff for no reason at all. If you want something very good to be composed especially, forget it. Are you with me?