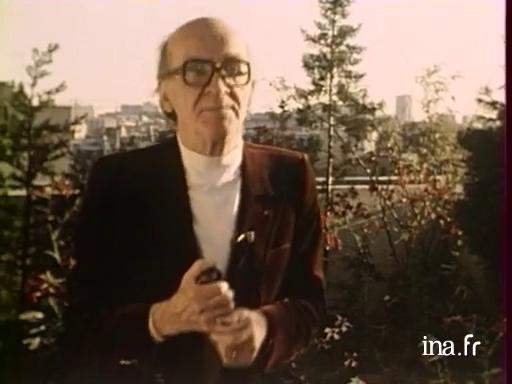 Portrait of the Romanian philosopher Mircea Eliade, from her childhood in Bucharest to her brilliant university career, mentioning her travels to the Indies.

Mircea Eliade was born in Bucarest (Romania) in 1907, and died in Chicago (United States) in 1986. A hard working and scholarly student speaking several languages, he published his first novel at the age of 14: How I Found the Philosophers' Stone.

Mircea Eliade studied philosophy at the University of Bucharest; there, he connected with a far-right thinker, Nicolae C. Ionescu, and also became friends with Emil Cioran and Eugène Ionesco. From 1928 on, he spent three years in Calcutta in India, where he studied yoga, which became the subject of his thesis, Yoga: Immortality and Freedom. Back in Romania, he started publishing novels, (Mitreyi. Bengal Nights, 1933) and taught Indian philosophy at the University of Bucharest. In 1940, Mircea Eliade worked in politics, on behalf of Ion Antonescu's military dictatorship, in London and in Portugal, where he wrote a brochure glorifying Salazar, a dictator. After the war, Mircea Eliade settled in Paris, where he started working on the lengthy Treatise on the History of Religions, which was released in 1949, the same year as The Myth of the Eternal Return. In 1956, his seminal work, The Sacred and the Profane, was released, and in 1959 Mircea Eliade was offered the chair in the History of Religions at the University of Chicago.

A member of the GRECE (Group for Research and Study of European Civilisation) in the 1970s, sharing far-right ideologies, Mircea Eliade nevertheless remains known as being a significant specialist in history and in religious philosophy.

Mircea Eliade was born in Romania, in Bucharest, on the 9th of March 1907. As a young secondary school student, he had already published several scientific and literary articles. After doing a degree in philosophy, he left at 21 for India. For three years, Eliade studied Sanskrit in Calcutta with Professor Dasgupta. And practiced yoga with Shivana Manda in a Himalayan Ashram. On his return to Romania, he defended his doctorate in philosophy and in 1933 became the academic assistant to the great philosopher Nae Ionesco. Eliade's courses were of course also about Aristotle's metaphysics as well as Indian philosophy or that of Nicolas de Cusa. In 1940, Mircea Eliade left Bucharest for London, then Lisbon and finally Paris. Invited by Georges Dumezil, from 1945 he started to teach courses at the Ecole des Hautes Etudes. He then published his Treatise on the History of Religions, Yoga: Immortality and Freedom. Eliade took part in the seminars in Ascona, founded by Jung. And accompanied by his wife, Christinel, took part in several conferences which took him from Tokyo to Uppsala and from Sydney to Mexico. Invited to the University of Chicago in 1957, he became director of the History and Religions Department. With honorary degrees from about ten universities, member of five academies, Mircea Eliade accomplished his work as Editor-in-Chief of the Encyclopaedia of Religion, a monumental summa in 16 volumes written by 1500 researchers and academics. Recognised worldwide, author of around forty works, translated into 16 languages and some twenty news or novel reports, Eliade renewed almost every science from the end of this century. From the history of religions to anthropology as from epistemology to cultural philosophy.

His great discovery, and that was the work of the XXth century, was the discovery of the coherence of the nobility of the internal logic of the metaphysical structure. Of archaic cultures, so-called primitive cultures. Only 50 years ago, the great anthropological scholars such as Frazer for example considered traditional primitive societies to be, if not backward, then truly infantile societies. All this was explained by magic, by superstitions.