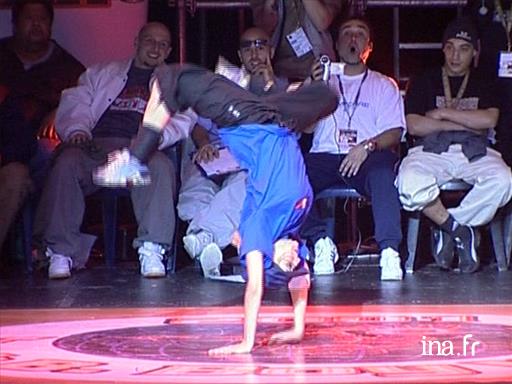 The dance circle used for a peaceful contest

As in many traditional dances, including European ones, a dance circle is also used for hip-hop. It is a collective circle; a soloist dancer leaves it to challenge another dancer, to see what he can do. The peaceful battles, international competitions with demonstrations of skills and know-how, are positive insofar as they encourage everyone to have new ideas, to surpass themselves. This is how the players develop their technique. The battle is a place of exchange and confrontation. In this documentary by Franck II Louise, himself a dancer and composer, partly recounts the first World Cup in Bercy in 2003. We see the breakdance attitude. Because before even defining its artistic disciplines, hip-hop is first and foremost a way of behaving: as part of the group and alone in order to make a name for yourself. Making a name for yourself here means having a place in an exclusion society.

When hip-hop arrived, it opened up the circle so it could be used by the audience. However, the circle continues to be the basic form used. It is surrounded by the crew who shout abuse or encourage the soloist, who then returns to the group once his performance is over. There is something paradoxical about the strength of the solo; it goes against those who say that hip-hop is an extension of African dances for example. The fact that some of the dancers are from an African immigrant background changes nothing. Hip-hop is a modern dance invented from scratch by Americans, ergo without any roots. Charlie in this story is the living proof of this.

As for the training, this was also invented by the practitioners of the dance, and it is out of the ordinary. He trains far from schools, and halls made out of clay or sand. Malls with closed iron fences have long been the «playground» for hip hopers where the dance is practised and passed on. After eating a kebab or a big burger, the dancers warm up the floor at 1 o'clock in the morning. It needs to be a little slippery, but not overly so, to allow the dances to make all the moves which are often very acrobatic. As for their clothing, it is a real to-do for these fashion experts who just have to have the right gear. Baggy trousers are important for emphasizing the moves and say a lot about their sense of fashion. Always wearing sneakers ensure proper contact with the ground.