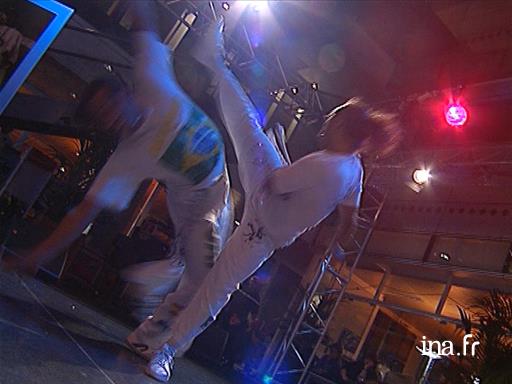 Two members of the Capoeira Panam group dance on the stage.

By developing in São Paulo, Brazil's industrial metropolis, capoeira groups came under the influence of the official sporting communities; they adopted the white uniform and took part in competitions, even though this meant they would have to adopt rules that were contrary to usual practice, which was dictated by the notion of showing respect to one's rival. Not everyone was interested in this development, and Capoeira masters like Sombra, and Santos gave the possibility to their students to develop other aspects of capoeira at the same academy. Many competed in acrobatics; several maintained their ties with contemporary dance. One of these masters, Gilberto Quini, «Beija Flor", came to France at the end of the 1980s to found a capoeira group and continued to make a living by putting on shows.

Of major importance were all the aspects that the audience found beautiful in shows, be it in São Paulo or Paris, including aspects associated and appreciated in dance in Europe, i.e. the lightness and fluidity of the moves, the virtuosity of the body, the quickness of the steps, the focus on non-violence. All this was added to the legacy of his capoeira.