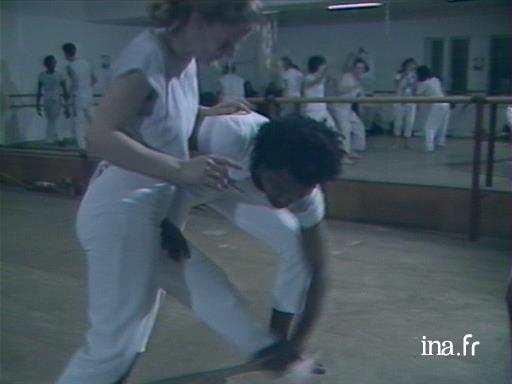 In Paris, a capoeira dance class (battle-game-dance) with Brazilian music. Interview with Garcia Gómez de Suza on the origins of capoeira (a type of street fighting that Brazilian slaves, who did not have the right to fight, disguised as a dance form). Interview with Claudio Lemos, teacher, on what makes a good capoeira.

Capoeirists mainly from Rio de Janeiro brought capoeira to Europe. From 1970, the inhabitants of Bahia opened schools in the richer southeastern states of Brazil, and numerous people started to dance capoeira. The authorities - Brazil was then a military dictatorship - tolerated a modified form of capoeira regional that promoted the values of sport, with more acrobatic movements, uniforms, military rituals, grades and competitions, and folk music played by an orchestra that mixed all the “black” instruments with simplified rhythms. The capoeirists, as they had learnt to do in the past, managed to live with the restrictions.
Pol Briand

Fights, games, dances, gymnastics, humour and music: capoeira is all this at the same time.
(Music)

Capoeira is something new in France. But in Brazil, it has entered into legend, and it is part of the country’s history.
(Music)

The origins of the capoeira are African. From its African origins, it developed in Brazil, in the State of Bahia by African slaves, by Hindus, by blacks who came from all corners of Africa, and now, it has become the Brazilian combat sport.
(Noise)

It was invented by slaves and became a form of street fighting. Today, Capoeira is part of the Brazilian Federation of martial arts. And now it is being exported, courses are given in Germany and Holland, and for a few years now they have been available in Paris. As with many martial arts, belts are used to show the students’ level: there are 7 in total. After the seventh, you become a capoeira master. Contrary to appearances, the qualities of a good capoeirista are not those that most people may think.

They are respect for others, humility and wisdom.

The training focuses on flexibility, strength, and agility,i.e. the basic pillars of any sport. But self-control is the essential goal of capoeira, and it is very much needed to be able to practice it as a game. At competition level, the capoeirista who is able to demonstrate a better technique than his opponent is the winner: in Capoeira, you don't defeat the other fighters.
(Music)

Since slaves did not have the right to play sports and had to disguise capoeira as a dance and a game, we now can enjoy a combat sport with Brazilian music playing, and have fun with friends.
(Music)