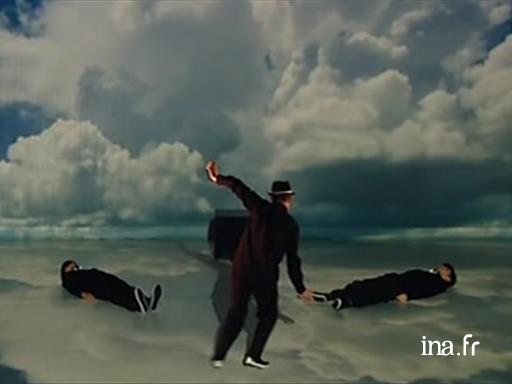 Farid Berki, from his home lino to abstraction

This is not the first escapade for Farid Berki, hip hop dancer from the North of France. His motivations cannot be explained in terms of a belligerent spirit or wanting to take a direct path to the hip hop movement. Farid Berki has always gone about doing things differently. One of the pioneers in the North of France, he quickly freed himself from American models but nonetheless retained the basic components of the discipline. After having danced a solo to flamenco music and revisiting Petrushka, one of his most recent performances in 2011, Vaduz 2036, he decided to address the notion of abstraction. He makes reference to Kandinsky, painter and sculptor who abandoned representational art.

For him, the important thing is not to stand out in society or to please conformists, but to combine his past experiences with the present that is free to be invented. Kandinsky, as a child, saw it everywhere: "even on the lino in the toilets» in his small working-class family home. This memory dates back to the creation of Vaduz 2036, a choreography stripped of any anecdote, of any social or political message. It is written to be played repeatedly, with a special attention to details, which are like precipitates of meaning, and acceleration of time. The choreography is abstract. The score uses the language of hip-hop, displacing it, stopping it in its momentum, de-constructing it. For example, the electrified hip-hop robots become akin to characters of Oskar Schlemmer, German painter and German choreographer who was a professor at the Bauhaus.

He was not the only one to open up new avenues, and it is nothing recent. In the middle of the 80s, the group Traction Avant de Vénissieux (69) already connected hip hop, contemporary dance and butoh. Another French Northerner, Brahim Bouchelagem, works with Russian dancers and Carolyn Carlson's haikus. Others, such as Sébastien Lefrançois, revisit France's romantic repertoire. Hip hop does not need to look for its roots, it already knows them too well. It provides insight into little-understood worlds, including the "documentary-like" dance of Hamid Ben Mahi.

With his taste for mixes, Farid Berki is one of the most creative hip-hop choreographers of his generation, and he is with us here, at the Théâtre de Suresnes, he is performing his newest creation, , a three-in-one piece that mixes hip-hop, classical and the circus arts.
(Music)

Farid Berki, as someone who loves to mix genres and styles, what is the idea behind ?

The idea behind is to put on a show in three parts, we put on three shows in one.
(Music)

You know, like in the cartoons where there's a character who steps out of the film and goes into another film.
(Music)

Why do you like this fusion of styles, is it to build bridges? Does it fulfil a need or is it...

No, it is something existential, let's say. Not only I am of mixed race but in addition to that, I have had the chance to live near the border of another country all through my youth. And so, I'm a frontier worker and I love crossing borders.

Why, in your opinion, is hip hop a great medium that mixes so well with other arts?

Well because it is a hybrid itself initially, that is to say, in hip-hop, there is something from African dances, but also Irish tap dance; It also takes something from the cinema, Buster Keaton and Chaplin, and something from cartoons.
(Music)

Juggling is something else you have brought to the show, why? We'll ask them.

We now say goodbye, leaving you with the events calender and three ideas for this weekend, first the festival Faits d’hiver, a Parisian event dedicated to contemporary dance, offering the possibility to the public to discover small venues that are very active in the social and artistic life of their districts. In total, seven places, such as the TARMAC, located in the 20th arrondissement and Micadanses in the 4th, which presents the work of eleven budding choreographers, including seven creations that will delight lovers of this perpetually changing contemporary repertoire.
(Music)

The Palais de Tokyo will be welcoming British singer Charlie Winston for a unique mini-concert, a sort of tidbit before his performance at the Cigale, scheduled for late March and the release of his album on 26th January. The hit singer who we know mainly for his grunge and pop rock is decidedly more Bohemian, with his softer, more intimate lyrics and calmer music; a sort of personal journey where Charlie is his own musician; playing all the instruments by himself except the drums: a real performance.
(Music)

An original night out that is sure to break new ground, with the seventh edition of the festival Belly Fusions. A 3-day festival which, as its name suggests, merges tribal dances and oriental dances with other styles of dances. Fifteen international companies will dismantle the different worlds,offering us for example, oriental drums, tribal fusion, or better still revisited hip-hop. A lab programme topped of by twenty thematic workshops at the Menilmontant Theatre, great if you’re a little curious.
(Music)

a great programme, it now just remains for me...