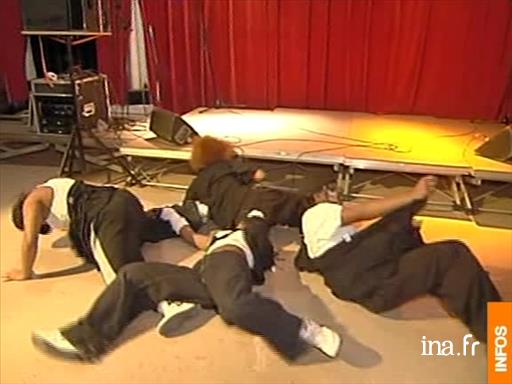 Krump dancers in their powerful kingdom

They should definitely not be confused with hip hoppers, although some of the dance figures and behavioural styles are similar. They are krumpers. They build and strengthen their kingdom: Krump, which is an acronym for Kingdom Radically Uplifted Mighty Praise, which the contemporary choreographer Heddy Maalem fortunately shortened for one of his shows with the krumpers: In praise of the powerful kingdom. Krump, yet another movement born in 2000 in the United States, thanks to the clown Tommy. Tight Eyez and Big Mijo, (aged 25 and 27) were the initiators. They grew up in South Central, one of the most violent neighborhoods in Los Angeles. They belong to a community that operates by its own rules - including showing proper respect for others-, its hierarchical families, and its members who are co-opted after huge battles. Not only does the «master» or «father» choose his «children», but the whole family must be satisfied with the applicant's dancing Amy, aka Monsta NY Madness, from the Parisian collective Madrootz, is a member of the Tight Eyez family aka NY Madness, with whom he trained for four years. He himself choose his own offspring, including Sista Amy, aka Needlez. These family structures that go to make up the Krump community allow you to distinguish styles and write the history of the movement.

The young women filmed in this story by RFO from the group Diamontztalk about the foundations of this discipline with its violent and war-like appearance. It is their avatars, their imaginary characters who are dancing. "It is an expression, says Nella Nella one of the girls, a message, as if we were being delivered from evil». One might see something similar to trance, but the characters come from horror films. As young people who have worked with Heddy Maalem can tell us. Wladimir Jean says that he is «a gangster, a semi-monster and a nutter who is capable of putting a bullet in the TV.» Anthony Jean is "a tiger and a crow, an omen of misfortune». Emilie is «the continuity of the river of [her] ancestors». Anthony-Claude isn't very lucky, his character is a twin, which complicates the situation: «I am a complex character. He is both a vigilante, but a vigilante who can punish by doing evil. It's really trashy and gory». Rize, a documentary by David LaChapelle (2005) is a good reference on the subject (krumping and clowning).

Irregular moves, unbelievable contortions performed at a frantic pace: krump is all this, a dance from the ghettos of Los Angeles. Keke, Nella Nella, C-C, and Nadrina belong to the very small family of krumpers in France. They discovered this dance during a trip and thanks to music videos of American rap. For all of them, it was love at first sight.

To begin with, Krump is very physical, and many men do it, and not many women, unfortunately. But we thought it was good and we decided to do it as well, as women.

The bond which is created between the audience and the krumpers is just wonderful. But in France, only a few dancers have dared to embark on this adventure.

In order for it to work in France, beyond the purely aesthetic aspect, you need people to understand the social driver behind it, because there is a force there; People only see one aspect, which is purely American, that is to say North American, which is purely a Western culture, because after all that’s where Hollywood is. For it to work in France, people have to understand these different factors.

In addition to the physical performance and the beauty of the moves, krump is also a vehicle for spirituality for these young girls.

Krump is something, it is a message, it is a form of expression through dance, it is as if we are delivering ourselves from evil. It’s as if the moves were gestures of deliverance. We are asking to be purified, that’s what it is. Those who do not understand it, they find it weird, but those who do understand it, look deeper.

Even if there aren’t many krumpers, the success of this movement is real. Fad or social phenomenon? for these dancers, the answer is simple, krump, either you have it or you don’t.