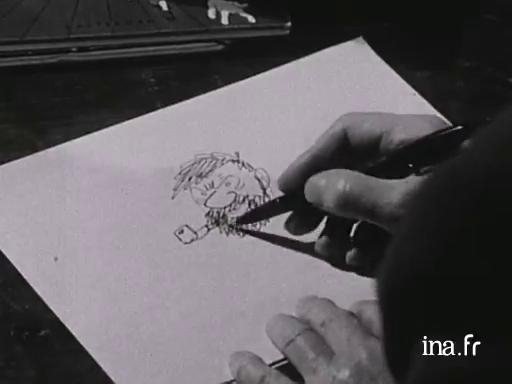 Interview with Hergé about the creation of Captain Haddock and his famous insults. This character was born in the album The adventures of Tintin: The Crab with the Golden Claws.

Born in 1907, Georges Remi, known as Hergé, was a Belgian author of comic books.

His fame came with The Adventures of Tintin and Milou, whose first episode appeared in 1929 in the Le Petit Vingtième newspaper. For fifty years, the reporter and his loyal dog travel the entire world. Their adventures are translated into over fifty languages and sold more than 200 million copies worldwide. Hergé also wrote Quick & Flupke (1930), about two rascals who constantly do silly things and Jo, Zette and Jocko (1935), the adventures of a brother and sister accompanied by their monkey.

Hergé's career is often suspected of having ties with the Nazi regime: he publishes anti-Semitic drawings in the papers, admires Mussolini and certain details in Tintin are a bit troubling. His ambiguous behaviour during the Occupation made him uneasy once Belgium was liberated. Forbidden from publishing, Hergé dedicated himself to the revision of his former books. In 1946, Raymond Leblanc, a former resistant, proposes to create the Tintin journal, with the participation of many illustrators and in which the eponymous hero's adventures continue. In 1980, Hergé is afflicted with leukaemia; he dies in 1983 in Belgium.

How did you come up with Captain Haddock?

Captain Haddock yes, how did I invent him? Well, it took place in "The Crab with the Golden Claws", I don't remember what year precisely, it must have taken place in 1939-1940, maybe 1941. So I needed a captain, a boat captain, a captain that's...drunk, so I made lots of sketches, lots of sketches to try to find this character, how can I explain it to you? Well, simply speaking, he was born within these sketches, and at first he was just a drunk. He drank a lot, very much, but then, thanks to Tintin's influence, I think it was Tintin who had a good influence on him. He slowed down, and even if he still enjoys downing a glass or two, or three, of whisky, he doesn't fall victim to the same excesses that he used to.

And when did he learn to pour out all of those horrible swearwords?

It was in "The Crab with the Golden Claws", that's right, that's where he started uttering these swearwords, but they're not as horrible as you say they are. They are words that have a certain ring to them, like "ectoplasm", I don't know, or "waffle maker", but they're not swearwords by themselves. Yes, I'll admit, illiterate is a swearword, but...

Anacoluthon isn't a swearword coming from the captain, I might be mistaken but I get the impression that it takes on another form, a dimension that's very, very violent. There's something there.

What exactly gave you the idea to make him spew out curse words like that?

Well, I remember, but I'm not exactly sure of the time period, he was probably already around, since it was in "The Crab with the Golden Claws", there was some sort of a political event going on, some treaty, some international political association, that I don't remember which precise countries took part in this treaty, it was a treaty of non-aggression as far as I know. And one day I heard a saleswoman, a street merchant, telling a customer that was probably trying to haggle over the prices which she disagreed with, she told the customer: "Listen you, you treaty of 4". I thought that it sounded wonderful, this treaty of 4 was obviously not a swear word at all, it was just a simple, a term, an expression. But then I used it afterwards to give Captain Haddock a wider vocabulary, and to use words in there that were therefore not cursewords but that had a tone that sounded like, that allowed them to pass off as curse words.