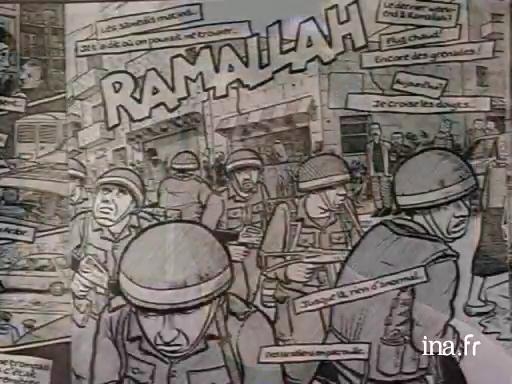 On the occasion of the French release of Palestine, Joe Sacco defines his book as comic strip journalism. He comments Israeli-Palestinian news and criticises the Oslo Accords. His book is sold in the United States and in London but not in Israel.

Born in Malta in 1960, Joe Sacco grew up in Australia than in the United States, where he graduated in journalism from the University of Oregon in 1981 before turning towards comics. After an interlude in Malta, he founded and edited the monthly Portland Permanent Press between 1985 and 1986, before joining the Fantagraphics Books team in Los Angeles, writing a column in The comic journal.

At the same time, he created the satirical journal Centrifugal Bumble-Puppy. Publishing his comic strip autobiography Yahoo (1988 to 1992), he travelled throughout Europe in 1988 then in Israel in 1992, creating Palestine which brought together the albums Palestine: An occupied nation (1993) and Palestine: in the Gaza Strip (1995). This non-fiction graphic novel, the first of its kind, in which she puts graphical innovation at the service of journalistic activism, earned him the prestigious American book award in 1996.

After Palestine, it was Sarajevo in 1995 - an experience from which he created Soba (1998) and other stories brought together later in War's End (2005) - and La Hague, where he covered the trials of Bosnian war criminals for Art Spiegelman's magazine, Details, in 1998. In 2000, Gorazde, based on his experience in the former Yugoslavia, confirmed him as one of the most innovative authors of comics on the planet.

So I do not know whether Vertige Graphic is a large publishing house, in the sense that you understand it, but in any case it's a wonderful publisher as it has just published this book by Joe Sacco, "Palestine". So there we abandon, we abandon the battle between text and image, since Joe Sacco, you dedicate entire pages to drawings, and other pages entirely to text. Was "Palestine" a form of journalism from the outset?

I studied journalism in college, at university, and when I was a kid I would draw comics. I wanted to put two and two together, so I really did consider this as a journalism piece But in comic book form, it is comic book journalism. I think that there are many things that can be done with the comic book in this form. You could depict the reality of situations, like these, in Palestine, visually. But you must, you have to include some text in order to transmit a political explanation, and to give the context to the images.

So have you seen the most recent political developments, do you believe in this peace, do you celebrate the liberation of Hebron?
(Silence)

Is your book sold in both Israel and Palestine?

No, as far as I know, no. It has arrived there, people bought it in London and brought it back from the Unites States. I was interviewed by the Israeli press on this book, so I know it has made it there, but not, it is not openly sold over there.

What do you prefer, that people say that this book is a great journalistic report, in the noble sense of the term, that it is a political contemplation, or that it is a work of art?

That depends on the readers. For me, it reflects my personality. I felt that I could go to Palestine, and if I had been able to write something in prose, I would have. But I think I am a writer in the body of a, of someone who creates comic strips, that is what I did.