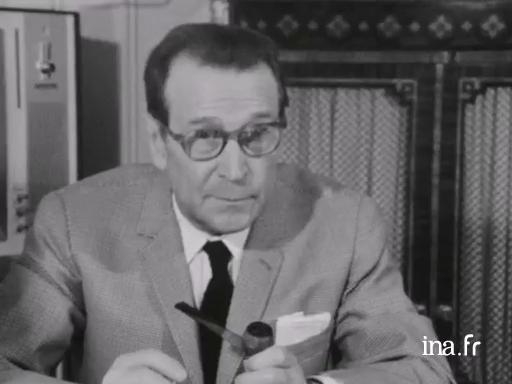 Georges Simenon is on a stopover in Paris on the occasion of the release of all of his works by publisher Rencontres and for the release of his latest novel, The Cat. After talking about the plot of this latest novel, he explains that for him, writing remains a vocation, but that he's never satisfied with himself. In conclusion, he admits that he always feels a genuine need to write to feel like he's in his characters' shoes.

When he was 17 years old, Georges Simenon (1903-1989) wrote Au Pont des Arches, the first of his 200 novels. At that time, he was forced to abandon his studies because of his father's illness so he became a reporter of short news items at La Gazette de Liège, a conservative newspaper where his penchant for police investigations developed. In 1922, he decided to live like a bohemian in Paris, publishing, under various pen names, soap opera novels at a frantic rate, which earned him the nickname "feuilletoniste-vapeur" (steam-powered soap opera writer). From 1928 on, he travelled on a barge through France then went to Africa and Asia as a reporter. In 1932, he finally settled in the La Rochelle region, which was the subject of several of his novels.

In 1930, it was in the Détectives magazine series that superintendent Maigret appeared, who was the main character of a first novel the following year: The Case of Peter the Lett. 18 others followed before the character retired for the first time in 1934.

After the war - where his passive attitude was the cause of suspicion around him - he moved to California, until his definitive return to Europe in 1955. During this time, in 1945, he signed a contract with the Presses de la Cité publishing house to continue his successful series with new novels that still have the Maigret name in the title, up until Maigret and Monsieur Charles, his last novel in 1972. Affected by his daughter Marie-Jo's suicide, his only activity was dictating his memoirs, which were published in twenty volumes.

This pile of books represents all of Georges Simenon's work. The author of the well known Maigret books is currently in Paris. The object of this trip: the publication, quite frankly, of his complete works and the release of his 191st novel: "The Cat". Can you give us a brief description of what "The Cat" is about?

Why sure, if you want, but it's not very funny. It's about two old men, very old, a couple that, moreover, were both married previously, both of them are widowers, and live here, in Paris, in a small house and they hate each other, in fact, because of the death of a cat. And they're also suspicious of each other. They each think that the other is trying to poison him. Each one cooks for himself. They don't speak to each other. They only communicate through small notes that they send to each other. Anyways, there are other episodes, of course. Things seem to be headed for the worst but despite all this buildup of hatred, I think that, looking back on it, I've written a love story.

I read two descriptions of Georges Simenon. The first is... You've been described as "a lawyer for men". And the second one is yours, saying that you're "a mender of destinies". Which one do you prefer? The one that you found?

Well, I'd prefer to be a mender of destinies but I wasn't describing myself when I said that, I was referring to Maigret. I would like to be a mender of destinies and be able to reconcile people with each other or with themselves, but unfortunately, I'm not. The only thing that I can sometimes do with my novels, is show them that they're not as bad as they think they are and that they're not just unique cases, that everyone has the same problems, more or less, the same problems, on a different scale, but that, in the end, human destiny is becoming somewhat more egalitarian, and is a bit more equitable.

When you wrote "Au Pont des Arches", you were 16 years old.

And, at that time, you thought that because you were writing, it wasn't a profession but a vocation. Do you still believe this today?

I still believe it today. First of all because only 1 out of 100... Out of 100 writers, only 1 succeeds. And second of all, even for those that do succeed, it's a rather tedious life. We're never satisfied with ourselves. Earlier, I told you that I screamed out in joy every time I finished a novel, but 24 hours later, I'm worried, I tell myself that it's worthless, etc... and that I completely screwed up. We're never sure about ourselves.

How do you feel, now, about having your complete works? Because they're going to be published by the Rencontre publishing house.

It scares me very much, you know? I wonder how readers are going to be able to absorb all of it without getting bored. I'm always a little bit more scared than happy.

So why do you continue to write? Because at this point, you don't have to write anymore.

Well I could have lived without writing and done something else, but I did it because I need to write. When I stay too long without writing, I feel so out of place, I feel so bad that I go see my doctor and I become an imaginary sick person.

You feel out of place four times a year?

Oh yes. Besides, right now already, for example, I haven't written in two months, so I can't wait to be in my office once again, in front of my typewriter and getting under the skin of my characters instead of being within my own.