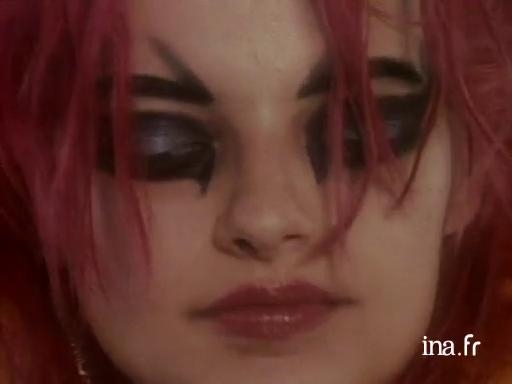 Portrait of German singer Nina Hagen, in concert in Brussels. She talks at length about her views on religion.

Born on 11 March 1955 in East Berlin to a family of intellectuals (her father-in-law was Wolf Biermannson, the dissident poet and singer), Nina Hagen left school at the age of 16 to join the Studio für Unterhaltungsmusik (studio of popular music), form her first band, Automobil, and record a song that has become legendary in East Berlin, Du Hast den Farbfilm Vergessen.

But it was in 1976, when her family was forced to move to West Berlin, that Nina Hagen's career took another dimension. She took trips to London, shared affinities with the rising Punk movement and released two records in quick succession, Nina Hagen Band (1978) and Unbegagen (1979) which transformed her into an icon of this new alternative and internationalist scene. African Reggae, a flamboyant song mixing English and German, demented singing of decadent opera, reggae rhythms and rock arrangements, durably stayed at the tops of hit parade charts all over Europe.

Settled in the USA, Nina tried, with mixed success, to keep pursuing this singular mix of punk, funk and opera (NunSexMarkRock in 1982, Angstlos in 1983, Street in 1991). The singer made a remarkable comeback on the front of the scene in 1999 by recording a version of Kurt Weill's The Threepenny Opera, followed by two albums (Big Band Explosion in 2003 and Nina Hagen & Capital Dance Orchestra in 2006), dedicated to the repertoire of jazz standards and popular German and international songs of the 1930s.

Brussels, 7.00 pm. Nina Hagen joins a few young Belgian punks waiting in the street in front of the entrance to the hall where her concert will take place in an hour. Few words are exchanged, but a family-like atmosphere reigns. It's quite an adventure, the youth of this singer born in East Berlin, the step daughter of a dissident singer that was deported from East Germany in 1976, because playing rock music on this side of the red curtain, is much easier. A huge persona whose excentricities are forgiven once you've heard this voice, which doesn't compare with anyone else's in the world.

What do you like in Edith Piaf? I think she was a freedom fighter too. She was singing love songs and true life reports she was making.
(Music)

What do you think about people that you see in the street that look like you?

Are there any eccentricities that you've wanted to do but haven't? [English]

Is there a question you'd like me to ask you?

Yes, ask me if I believe in God.

Do you believe in God?

Yes, I believe in God.
(Music)