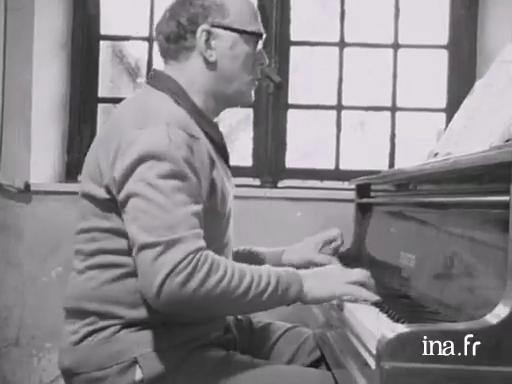 Portrait of baritone Dietrich Fiescher Dieskau and rehearsal of Hugo Wolf's lied The Knight of Fire with pianist Sviatolslav Richter, in the context of the musical festivities of Touraine.

The great baritone of the 20th century was born in 1925 in Berlin. His first artistic taste was for poetry. Very soon he headed for the Lied, a difficult word to translate: the great Germanic melody without the insipid aspect that this word retains in French.

Then, in the 50s and 60s he had a crazy idea: to sing (and record) the whole repertoire of Lieders! Naturally, Schubert, Schumann, Brahms, Wolf, Liszt, the masters of the Lied, formed the base of his repertoire, but his curiosity made him tackle a crowd of musicians for their melodies, for example by Spohr or Raynaldo Hahn... We find his taste for poetry in his singing style, an extreme attention to the texts, subtlety and nuances, clarity and great musicality. His protean talent allowed him to also sing Bach, Mozart, Verdi, Wagner, not to mention the contemporary repertoire (Schoek, Messiaen, Reimann...). After the Second World War, he was among other the symbol of the new Germany. This humanist was also a musicologist, author of essays about Schubert, Schumann, Wagner... He was even a painter and since his brutal decision to stop singing in 1992, a conductor and a professor on the art of Lied.

Dietrich Fischer Dieskau, the greatest baritone in the world, has been in Tours since Sunday, on the occasion of Touraine's musical festivities which take place at the Grange de Meslay. Yesterday afternoon, Fischer Dieskau, whom critics consider to be one of the greatest operatic artists of the century, had a rendez-vous with us as well as with the incomparable pianist Sviatoslav Richter, who, for these two exceptional concerts, was willing to accompany him. We were therefore able to film a few moments of the meeting of these two musical giants in an ancient, isolated farm in the Tours countryside. Since they've met up again in Tours, Dietrich Fischer Dieskau and Sviatoslav Richter are inseparable. No visiting of the Loire castles for them. Entirely dedicated to the music, they spend their days in this small room, a true monk's cell, to work relentlessly. Tonight, Fischer Dieskau and Sviatoslav Richter perform a show devoted to Wolf's Mörike Lieder. By allowing us to watch the beginning of their work, their rehearsals, we were able to film this document for you, [Der Feuerreiter], The knight of fire, one of composer Hugo Wolf's Lieders.
(Music)