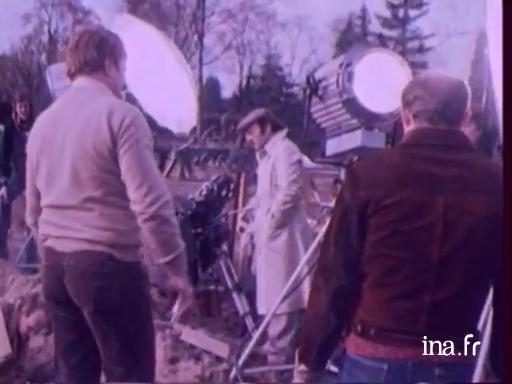 Report on the shooting of the film The Tin Drum and interview with director Volker Schlöndorff and the original author of the novel, Günter Grass.

Unlike other filmmakers of his generation, such as Wim Wenders, who was sometimes included in the "New German Cinema" movement, Volker Schlöndorff specialised himself in making adaptations of novels: after Robert Musil's Young Törless in 1966, he imposed himself in Germany with Heinrich Böll's The Lost Honor of Katharina Blum. (Later on he'll adapt to film Yourcenar, Proust and Arthur Miller).

His adaptation of Günter Grass's The Tin Drum (1979) concentrated itself on the first part of the novel, where, during the Nazi regime, a young boy named Oskar holds firmly onto his little drum and stops growing with just his will (the novel continues up until Stalin's death in 1953).

Both a scathing attack on Nazism and an allegory of 1970s youth which "refuses adult responsibilities", the film earned Schlöndorff a Golden Palm at the Cannes festival in addition to an Oscar for the best foreign film in 1980.

On the subject of German cinema, let's take its pulse through a man who is currently shooting a film The Tin Drum, a man you might know if you've seen Young Törless. It was his first film. His name is Volker Schlöndorff.

Volker Schloendorff is one of the few contemporary German directors that is known in France, notably thanks to his first film, Young Törless. Schlöndorff, who was Louis Malle's assistant and lived a long time in France, has undertaken a task that until now has been considered to be impossible: transposing to the screen Günter Grass's novel, The Tin Drum. This extremely complex work was written in Paris by the contemporary German author who is currently the most famous one at home and also the best known one in France. This novel was a huge success in Germany, where it became a classic.

The central theme is essentially adults as seen by a child. It takes place in the 30s and 40s, the rise and fall of Nazism as seen by a small, middle-class child who refuses to grow up, who for 20 years has the mentality of a 5 or 6 year old, and he lives throughout this period... I must say that he doesn't grow up except for one limb. The opposite as for old people. In other words, at the same time, he has a passionate love life with women of different ages who are a bit like, as with Candide, the stages of his crossing through Nazism. First of all, it's a look at Germany, its barbaric side. It's a movie that's rather savage, like the novel I think, meaning that it also introduces the deep irrationalism of German history of his story. And I think that - and I'm not bragging - that we were able to capture that multitude of baroque and irrational episodes, and strange characters in the film with the great comedian that is our main actor who is as good as the greatest comedians of the silent films, such as the Kid or Harry Langdon.

[German] I find that many of today's youths have lots of Oskar Matzerath's influence. I think that in Germany, there are, in each generation, many youths who refuse to become adults and oftentimes keep wearing their shorts until they become old. They want to escape from the maiming and responsibilities associated with adulthood.

Volker Schlöndorff found David Bennent to play Oskar. David also suffers from a growth deficiency. He's 12 years old but is no bigger than a 4 year old. His father is an actor in Switzerland and also plays in this film, in which Charles Aznavour and Andréa Ferreol each have a small role. The last scene of the film takes place in a cemetary. Oskar's father, dead after having swallowed a swastica, is buried. Oskar then throws his drum into the grave and starts to grow.