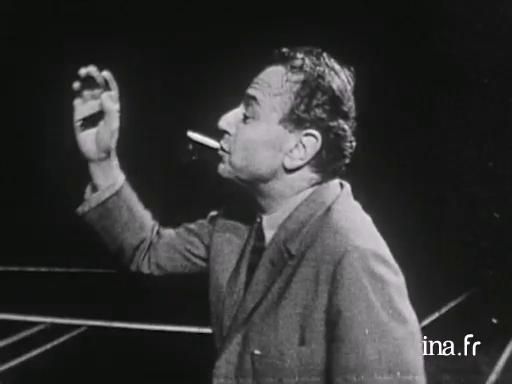 Report on the rehearsals of Romeo and Juliet, staged by Michel Cacoyannis at the TNP in Paris. Conversation with the director and the actors and excerpts from the rehearsals.

Michael Cacoyannis was born in Cyprus in 1922. He studied law in London before venturing into an artistic career. He produced Greek radio programmes for the BBC and studied production and acting.

Passionate about tragic destinies, he became script writer, producer and director for his films, and a theatre producer. Returning to Greece in 1952, he gained success in the cinema withWindfall in Athens. He also directedStella(which introduced the actress Melina Mercouri), The Girl in Black, Electra(which received several prizes throughout the world, notably the Grand Prix du Jury in Cannes in 1962), Zorba the Greek(nominated three times for Oscars in 1964),Iphigenia(1977) and more recentlythe Cherry Orchard(1999.).

In theatre, his major productions werethe Trojan Women, at the National Popular Theatre in 1965 that the John Paul Sartre adaptation, Iphigenia(1967), Romeo and Juliet(1968),The Bacchantes(1977).

Romeo, Robert Beniot, winner of the latest academy award, Juliette, Francine Racette, a young woman from Quebec who came to Paris four months ago. Lise Delamare, Jacques Mauclair and Jean-Pierre Cassel complete the casting for Shakespeare's Romeo and Juliette, in the Jacques Copeau adaptation. Introduced just now to the press, at the popular national theatre. Director Michel Cacoyannis, director of Electra and of Zorba the Greek. He is also Greek but the theatre company is English. This former lawyer has become one of the best contemporary directors. Georges Wilson, after the success of The Trojan Women, once again appealed to him to put on Shakespeare in Paris. Following rehearsals from the beginning, we wanted to show you the work of one of the great men of theatre, confronted with a text and some actors.

I feel as I have rarely done with a director, with regard to the freedom of the work. That is that he's extraordinarily particular, and he gives you the impression of letting you do anything.

He is gently brutal, I think. It is very difficult because he asks a lot of us, but it's extraordinary to work with a guy who believes in us, who asks still more than you could believe of us. That is that with us, he asks a lot because he knows that he has to, because we have not done theatre before. The evening of the premiere I will perhaps be very nervous, perhaps I will be unable to perform. So he has to give me a technique to stop me from screwing up, it's true.

You can't! when you are very emotional, you can't stop like that!
(Silence)

And you, are you not a bit rebellious at times?

There's the slightly French fault, where everything becomes illogical, they believe that it's logical but they explain it. You don't have to explain things, you have to live them. You understand them better if there is emotional logic. You don't want to make a speech to the audience. You have to live the role and they will understand.
Work session.

Sometimes I impose things because that's the entire spirit which must come out where the actor's personality must be integrated. That must create a moment which is more important to the play than to the character. So, that's where I intervene, for example I might sometimes want anti-emotional things.
Work session.

For example if there is a crescendo, it is necessary not to start too early, so I make myself understood, I say right, that's too early. If you put too much emotion into that moment, how will you come to stir the inner scream, where do you put the accent, the accent must be put naturally during the scene.
Work session.

Do you feel that you are a very authoritarian director?

Some say I am. Nevertheless, I must say that my relationships with the actors are marvellous, I've never had problems with actors. Because I don't demand things that are either impossible or false, I hope.