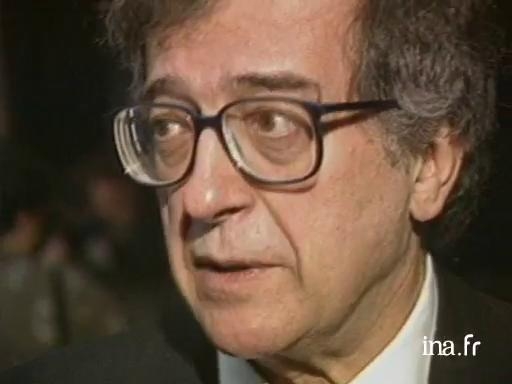 At the Bastille Opera, it's the first time that a contemporary work is given, Luciano Berio's: A King Listens.

One of the great names of contemporary music. Born in 1925 to a family of musicians, Luciano Berio studied music in Milan and discovered the musicians of the second school of Vienna (Schönberg, Webern, Berg), and modern composers such as Stravinsky or Milhaud. Under the influence of Luigi Dallapiccola, he took an interest in serialist music (Nones), and he participated in the famous meetings of Darmstadt where he mixed with Pierre Boulez, Karlheinz Stockhausen, György Ligeti... Berio turned toward electro-acoustic music (Thema, Omaggio a Joyce). In the seriesSequenza he explored instrumental virtuosity and the infinite possibilities of the human voice with his wife Cathy Berberian.

He achieved international fame withLaboryntus 2andSinfonia, which used the collage technique. Then he wrote Coro, which mixes languages and folklores, and two operas:La vera storiaandUn re in ascolto. For this human and imaginative musician, technical research never masked expression or sensitivity - and humour... His activities were numerous: founding the Studio di Fonologia Musicale in Milan, held a series of concerts and published a musical review. He managed IRCAM in Paris in the 70s, then founded Tempo Reale in Florence and led a career as a teacher in California, Harvard and New York, without mentioning his activities as a conductor... He died in Rome in 2003.

For the first time in the young career of the Bastille Opera, a contemporary work was presented yesterday evening, A King Listening, by the very Parisian Italian Luciano Berio. Marie-Claire Gauthier, Ambroise Perrin.

It is not common to see the chorus suspended in the flies. But you have to say that for the creation in France of A King Listening, Luciano Berio drew on a repertoire where paranormal phenomenon are legion. Shakespeare via Italo Calvino, a fantastical yet contemporary mixture. But it still an opera no?

No, a musical production.

What is the difference?

And there the public is numerous, united in a veritable lyric climax, avid to finally see the Bastille blend itself into its era as a theatre and a stage. The paradox of creation, is precisely the chosen moment by the staging in order to offer a striking contrast which is congratulated, the rigor of a prime partition.

The Maison de Peyrac is made to be open also to contemporary music, but the space is rather special, rather modern, and does not make many concessions to a taste for older style. So there is a great deal of mobility within. So one can do many things with the space.

And welcome a great many people. On a stage, listening, like the king to history.