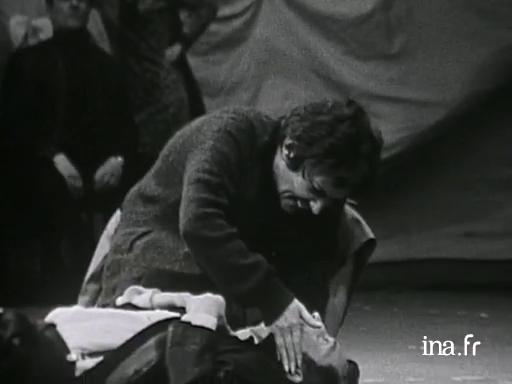 Maria Casares rehearses Jean Genet's play The Screens, staged by Roger Blin at the Odeon theatre. The actress explains how she perceives Genet's text and how she works it.

Maria Casarès was born in Spain in 1922. Her father was a Spanish republican minister. Forced into exile, the family moved to France in 1936. In 1942 Maria Casarès graduated from the Conservatoire national d'art dramatique in Paris.

Her strong temper, her prodigious performances of the greatest roles (Medea, Lady Macbeth, Joan of Arc...), her husky voice and a unique diction made her one of the great tragediennes of her time. Her career is most notably marked by performances of Camus pieces(The Misunderstandingin 1943,The State of Seigein 1948,The Just Assassinsin 1949), Sartre (The Devil and the Good Lordin 1951), Genet (The Screensin 1966), Molière, Tchekhov, Péguy, Marivaux, Ibsen. In 1952 she joined the Comédie Française and in 1954 Vilar hired her in the Théâtre National Populaire, with which she'd set the stage alight in the Festival of Avignon.

In the cinema she filmed around twenty feature-length productions, notably with Marcel Carné inThe Children of Paradise(1943) and with Jean Cocteau. From the end of the 1960s, she came back to the theatre under the direction of Lavelli, Sobel and Chéreau. Maria Casarès died in 1996.

"The Gods are harsh, but when the Gods realise what I'm made of, they'll think twice. Saïd's father could have been a barber, with his comb and his electric clippers. He's handsome, so handsome that he was almost blond. My beauty, my beauty, for twenty years, if you stayed on earth… My beauty. It's because my soul wanted it this way. Saïd! Saïd, where are you? What are you doing? What are you saying? You're out of breath, come back! No! Go further away, Saïd! Destroy yourself, destroy your wife, but keep on going!" I don't think I've ever gotten my hands on such a lively set of lyrics, if you will, such a… that, at the same time, requires as much from its interpreter, that requires as much from her because it needs… These are lyrics that you can't recite, that you can't arrange in a more or less rhetorical manner, never. Each word must always be alive, each object must always bear its weight and each… I don't know if there's a moon, if a moon exists, but it exists for actors who talk about it. You can't include it in a sentence. But at the same time, this sort of requirement puts you in a never-ending state of needing to invent with it. So it's incredibly alive when you get a hold of it. It's as if they'd made a material that never stops moving, and that you have to take with you at the same time, to include it within yourself of course, but that carries you at the same time. "It happens to me! It just happened to me, it just happened to me, but it's over. That's not true, it isn't possible. You're not dead? What did I say? Get up. Get up. Stand up. You're not dead. I didn't kill you, did I? Answer me, I'm begging you, answer me. The little French soldier, love, my love, my kitten, my titmouse, get up. Get up you shit!" You especially need a mood for this play. You need to start with a mood. That's why I'm so sad to be sick, because I think that you need an energy that's as big as the play to perform it. You need inspiration, because if there's inspiration to be had in a play, there's plenty in this one, and you also need energy. And a jubilant mood, meaning that even in the most moving instances, or tragic ones, because nothing is tragic in the usual sense, if you will, but in things that are the darkest, or whatever, there is a sort of jubilation as if you were eating something with your entire jaw.

Fruits, well, that's an entirely different thing, but that's not him. That's something else. But right now, I haven't found it yet, you know. Is that it?

And after so many problems…

Did I say that?

And why not? You have to have fun, after all!

That's true, you know, but who would have thought it was possible?". But there's one thing, Roger, I don't want to see him again, this guy.

No, because you tell me that he welcomes me, but I don't want to see him again. I mean, if I don't notice him, that's totally like me, because after that I'm going to say "this guy"…

But look, it doesn't matter. I mean, still, it's better that I be…

Yes, yes. Meaning that you recognise him from his "you don't say", we could say.

No one will ever be able to [inaudible] them.

But there's something else.

Ah, it's cut! Oh really! No one will be able to [inaudible] them.

When I saw you messing around like never before [inaudible].
(Laughs)

And yet, an [inaudible].
(Whispers)