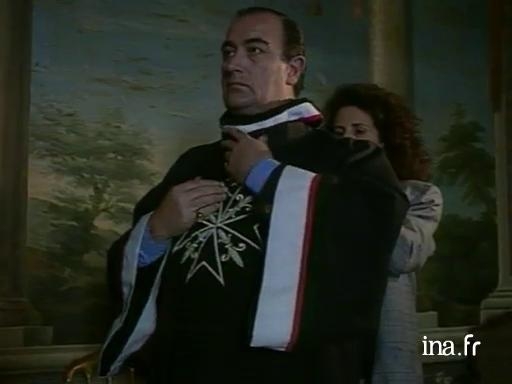 A brief historic presentation of the order of Malta and images from the Saint John of Malta Cathedral: from its foundation in 1530 to the current role of this institution.

A religious and military order founded in 1050 to assure the care of injured pilgrims, the Order, on a quest for territory to reinforce its authority, first set up in Cyprus in 1291 then in Rhodes in 1308. Hunted down by Muslims in 1522, the Order relied on the emperor Charles Quint who finally granted them Malta and Tripoli in 1530. This event began the "Maltese Falcon" ritual: every year on All Saint's day, a live falcon is offered to the viceroy of Sicily (the title that Charles Quint bore).

The mission of the knights in the Order of Malta was to fight against Muslims and heathens. Members of the European Christian nobility, the Knights took vows of allegiance, chastity and poverty. They wore the Maltese Cross, each one of its four branches representing the values of justice, prudence, moderation and courage. The community was divided according to its native language, each nationality inhabiting a pavilion. In Malta, the Order gradually exercised its authority over the whole of society by reorganising the legislation and by reinforcing the island's defence structures (forts...).

After several decades of peace, the Muslim and Turkish attacks began again in 1565. But the knights resisted their old enemies to later succumb to other weapons: in 1797, they were forced off the island by Napoleon. The order became ecumenical and sought out its origins, today it carries out humanitarian work throughout the world.

Here, in the crypt of the Saint John of Malta Cathedral sleep some of the most famous masters of the Sovereign Military Hospitaller Order of Saint John of Jerusalem, of Rhodes and of Malta, better known as the Order of Malta.
(Music)

There is even the recumbent figure of Philippe of Villiers, of the Isle of Adam who placed the knight in Malta in 1530. And that of Jean de la Valette, the man through whom the order was to be maintained during a period of more than two hundred and fifty years. A place charged with emotion for Edward, a Maltese, who has worked for years with the order and who aspires to one day becoming a Knight of the Order of Malta.
(Music)

The order was born nearly nine hundred years ago in Jerusalem when the first crusades were beginning. At first an Hospitaller Order, due to the insecurity of the area at that time, they also became a military order. At the end of the 13th Century, those whom are called them infidels chased the Knights Templar and they settled in Rhodes. The order then became a sovereign power, coining money and possessing its own fleet. Over the course of two centuries, the ships bearing the red flag stamped with the white cross acted as the police of the oceans. During that same time, the Hospitaller reputation of the order increased considerably. But in 1522, Suleiman the Magnificent finally ended the presence of the Knights on the Island, and it is to Malta that they finally found refuge. The archipelago will be the last territory of the knights. Bonaparte ended their temporal power. Today, although it does not exercise authority, the Order is once again in Malta where thirty-two knights perpetuate the traditions and works of their ancestors. Baron Traponi Galéafériol is one of them, and the brother of Imek and their spiritual guide.
(Silence)
(Music)

In his palace, the Baron put on his robe with pride. Here, everyone remembers the courage of the knights. They made it possible for Europe to no longer fear the Turkish invader.