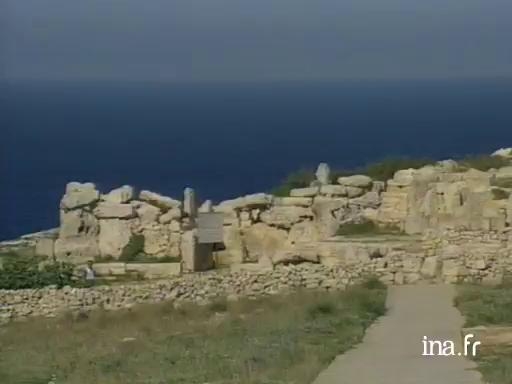 Jean Courtin, director of research at the CNRS and specialist in underwater archaeology, set up an expedition in Malta to search for paleolithic caves. He explains the renewed interest in underwater archeology following the discovery of the Cosquer cave. These searches are encouraged by the fragments of the Mnajdra temple which date back to 4000 B.C.

The islands of the Maltese archipelago have witnessed human activity for tens of thousands of years. Underwater archaeological searches that have been conducted for decades, fruits of specialised international scientific partnerships, have revealed the wealth of these traces and refined our knowledge of history.

But if the antique period and the occupation of the island by the Phoenicians (from 750 BC) is becoming better known, the prehistoric era and the origins of the first populations still holds many mysteries. The discovery of wall paintings in underwater caves in Maltese waters shows the presence of dwarf elephants and hippopotamus, but also Neolithic man, the first painters in history. They were in a region that formed a bridge between Europe and Africa, 27,000 years BC. The melting ice transformed Malta into an archipelago, soon hit by a second wave of population around 5200 BC. These new migrants, the first farmers, left traces of tools, figurines and had erected dozens of megalithic temples. Archaeologists still wonder about the origin of these monuments, discovered for example in Mnajdra and Tarxien: what method did the builders use to erect the stone masses that weigh over a tonne each?

Despite the advances in research, science also has difficulty explaining the sudden disappearance of these populations in 2500 BC, well before Malta became an influential centre of Mediterranean commerce.

A great dive into the depths of our past since we are going to speak of the Paleolithic, you know, this period that runs from 10,000 to 25,000 B.C. Well, at this time period, the level of the sea was much lower than it is today, 130 meters below our sea level. And so the lands that are flooded today were dry, and humans lived in the caves that are nowadays submerged. So evidently, it is a story that fascinated marine archaeologists, who incessantly explore these caves in an attempt to retrace this ancient human settlement. To such a point that in Malta, an eminent French paleontologist did not hesitate to put on an oxygen tank and diving suit to go and explore these caverns: look!
(Music)

In a submerged cavern, a man inspects the flanks of the Maltese islands, an encounter with history within a honey colored archipelago in the middle of the Mediterranean.
(Music)

This diver is in fact Jean Courtin, a 58 year old homo sapiens, unique in his genre. Research director at the CNRS, he is also the leading specialist in Europe on marine prehistory.

Having become a pre-historic specialist, I understandably conducted some land digs, cave digs I have always done, but by being a diver, I came to study underwater caverns during the 1960s. . My aim was to go further, to see if during the ice ages, these c

The discovery of the Cosquer cave, 2 years ago, affected prehistoric experts throughout the world. Thanks to drawings of animals or hands, Jean Courtin was able to prove that 27,000 years ago, humans lived on a coastline that is today submerged in the sea. In Malta, it is the same procedure, with the French department of submarine archaeological research, he participates in the initial explorations, in search of Paleolithic caverns. . Their hope is to find traces of a still unknown civilization.

During the last ice age, let's say about 20,000 years ago, the ocean sank to its lowest level, up to 120-130 meters under current sea-level. For example, the North Sea was dry, the British isles were connected to the continent, were not islands and we could walk on foot over the Bering strait which was also dry, from Siberia to Alaska. Malta was connected to Sicily during this last ice age as there were maximum depths of 90-100 meters, so there was a small isthmus and humans could go on foot to populate the Maltese archipelago.
(Music)

The objective of these dives to submerged caverns is to discover sedimentary blocks that formed in the open air, and that could potentially contain the remains of animals, of fauna, of bones or even worked flint or carbon residues to indicate that the cav So we will take small samples that will allow us to date the period when the cavern was above ground.
(Music)

These scientific dives in the grottoes of Malta are only beginning. On the cliff, at Mnajdra, the oldest temple in the world dominates, built approximately 4,000 years B.C. For the prehistoric expert, it is an additional hope that they will be able to further back-date the era of the first inhabitants of the archipelago.

It is not entirely impossible to find traces of a more ancient human population, because in Sicily, we have found Paleolithic traces, we also know grottoes decorated with engravings, therefore why wouldn't there have been such in Malta?

Jean Courtin recently gave rise to a number of vocations. They are not all prehistoric experts, of course, but they are fascinated by this other world.

The divers are more and more interested in exploring, to visit submarine grottoes which, even if they do not conserve paintings or engravings like the famous Cosquer grotto, they still make an unforgettable spectacle with stalactites and stalagmites that
(Music)