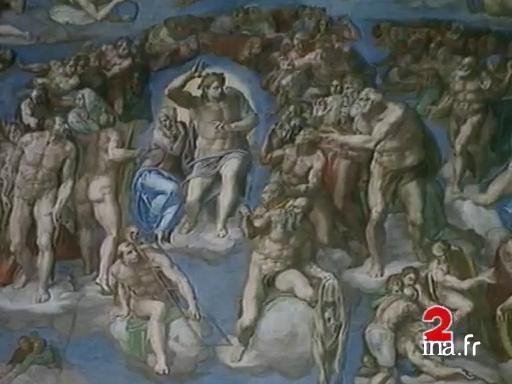 The entirely restored Sistine Chapel was inaugurated under the presidency of Jean-Paul II. Presentation of the mural fresco The Last Judgment whose restoration finally allows us to discover the details of this work, which took Michelangelo seven years to create.

Erected between 1477 and 1483, according to the wishes of pope Sixte IV (1471-1484), who wanted to provide the pope's hall with a new meeting room able to accommodate its 200 members, the college of 20 cardinals, the representatives of the orders and large families as well as the numerous laymen, the Sistine Chapel was built where the medieval Capella Magna was. Nevertheless, architect Baccio Pontelli preserved parts of the walls in order to elevate the work (21 metres high, 40 metres wide).

From the ground, covered with a medieval mosaic, up to the vault, and through the lateral walls and triangular rider arches, the entire space was designed to celebrate the events of Jesus Christ and Moses's lives, but also to honour the memory of the first popes. Famous artists were called upon to paint the Chapel's frescos (Boticelli, Le Pérugin, Ghirlandalo...), but the most famous one was Michelangelo, who hesitated at length before accepting to decorate the vault. It took him four years, from 1508 to 1512, to achieve the fresco dedicated to Christ's figure, and from 1536-1541 he added the Last Judgment to it. The Last Judgment, which is located at the end of the Sistine Chapel, was meant to celebrate the pope's newfound authority after the 1527 pillaging of the city by German mercenaries.

From 1980 to 1994, the most technically advanced experts in restoration worked to bring back the original colours and designs, an event which created controversy on behalf of specialists who had their own theories, based upon pre-restoration images.

...what we could say this noon about this ordeal, on François de Grossouvre's suicide. As promised yesterday, the official inauguration, today, of the Vatican's Sistine Chapel whose paintings have been renovated. 13 years of work to bring the splendour of Michelangelo's work back to life. Jean-Paul II presided over this ceremony himself, which was followed by a mass. From Rome, Alain de Chalvron, France 2's correspondent.
(Music)

After 14 years of work, the Sistine Chapel's splendour is brought back to life. The final and most difficult step of the restoration, the Last Judgment. This massive 180m² fresco was revealed, this morning, by the Pope during a solemn mass on a worldwide television broadcast. Before it was restored, the Last Judgment looked like this: sombre and opaque. Today, the colours have found their liveliness and their delicacy. The cleaning work, the removal of layers of glue, smoke traces and soot allows us to rediscover the details of the 300 people in the fresco, from Jesus, a beautiful young beardless man full of strength and beauty to the damned who are rotting in hell amidst the demons. Michelangelo, who painted his own portrait, here, with a terror-stricken expression, took 7 years to paint the Last Judgment. 7 years, or, 3 more than for the entire vault, this sublime 800m² vault that's 24 metres high. When he painted the Last Judgment, Michelangelo was 22 years older. He was in his sixties. He expresses his fears, his anguish and his fantasies there, very crudely, without prudery. Too crudely, sometimes, in the eyes of the Church princes. 40 naked bodies are therefore dressed up through the years. The restorers gave them, when it was possible and authorised by the Pope, their original nudity. Here, for example, for Saint André. Despondent souls will probably once again miss the Sistine Chapel of old and reignite the controversy. But the experts are sure:

For me, it's absolutely certain that what we see, is what was painted by Michelangelo. And what is certain is this, no paint has been brought up on the scaffolding to do some Michelangelo.

In truth, a simple visit is all it takes to put to rest, forever, any debate.
(Music)