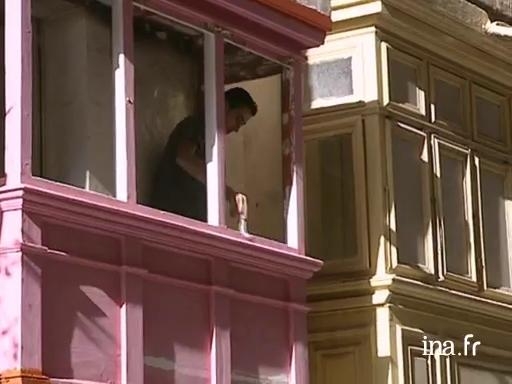 Report in the historic centre of Malta's capital, Valette, where hundreds of appartments in old buildings are abandoned. The mayor hopes to rehabilitate the housing with some help from the European Union.

The capital of the Malta archipelago covers natural ports on the north of the island. A town created in its entirety by and for the Order of Saint John of Jerusalem, it is today classed as a world heritage site by UNESCO. Fleeing Jerusalem and Rhodes that fell at the hands of Solomon the Magnificent, the Order settled in Malta in 1530 to found its defensive and religious site. The new town was organised around the plan of a roman camp surrounded by a wall and dominated by several forts, following the plans of the engineer Francesco Laparelli. The idea of a citadel soon made way for a fortified town. Obeying rules that controlled town planning and sanitary conditions, an architectural unity was assured. The town is entirely in the image of the Order: noble, austere, military and religious. Girulamu Cassar succeeded Laparelli and inspired him with a certain mannerism.

A strong demographic growth marked the 17th century and Valetta, walled in, got denser and built several baroque churches and started construction of an aqueduct. The 18th century positioned Malta at the heart of Mediterranean trade, giving rise to a large expansion of the port area. The emergence of an intellectual bourgeoisie transformed the urban landscape. The capital equipped itself with a library, a theatre and a university. Faced with overpopulation, the people headed for life in the country and the town began its decline to become the museum-town it is today.

Its postcard image fits it like a glove. But the most densely populated country of the planet is gradually disappearing beneath these abundant constructions. Malta is letting itself be invaded by the buildings and the million tourists that cram in there each year. Far from the crowds and the developed La Valette centre, there are hundreds of empty apartments, abandoned. Too expensive to maintain or just poorly located. In this modest neighbourhood, for example. The young mayor of La Valette is going to give us a tour.

It's a cultural shock, a city that's so rich with such a cultural heritage. And unfortunately, the state of certain places... That's why, with the European Union, we would like to rehabilitate this zone and a few of these properties.

Little by little, La Valette is coming back to life. Seduced by its antique charm, a few families are coming back to settle in the neighbourhood. Josephine is the new owner of this 16th century building. The improvement work cost her a lot.
(English)

Restoring the house, it cost us 75% of its price. There's always work to be done, the paint that's chipping away. It never ends, really. That's how it goes with old houses, but I'm happy.

The mayor dreams about restoring the Old Fort right next to where we're at. Today, it's a squat. But if it turns into a cultural and political centre, then the families will come back to live in the neighbourhood.