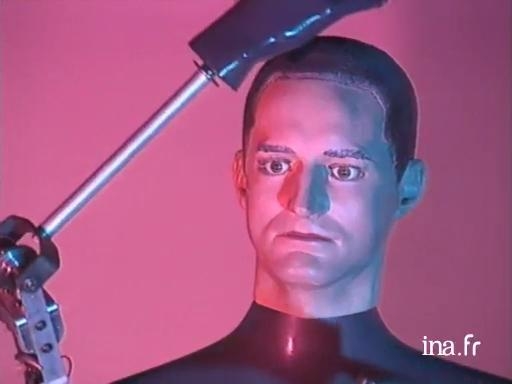 Electronic music group Kraftwerk introduces the robots that will play the concert in their place.

Founded in 1970, the German duo Kraftwerk is regarded as being a pioneer in contemporary electronic music, and in this respect, they have greatly influenced today's electronic scene.

As part of the original formation, Florian Schneider-Esleben and Ralf Hütter released the album Kraftwerk in 1971. It was soon followed by Kraftwerk 2 in 1972 and Ralf und Florian in 1973. The music made by Kraftwerk ("electric plant" in German), which is experimental and avant-garde, is made up of repetitive synthetic sounds, sometimes embellished with a computer-processed voice (the "vocoder" effect). They celebrate the modern world's man-machine alienation. With the arrival of Wolfgang Flür and Karl Bartos in 1974, they became a four-piece, and Kraftwork gained international recognition with the Autobahn album. It was followed by Radio-Aktivität in 1975, Trans Europa Express in 1977, Die Mensch-Machine in 1978... All of these albums were explorations of the technical possibilities offered by electronic machines, synthesisers and drum machines, and were trips into a cold, post-industrial and automated Europe.

After briefly disappearing in the 1980s and a change in the lineup, the group played again - sparingly - on stage during the 1990s and released several compilations in addition to their first live album, Minimum-Maximum (June 2005), proof of their live shows' visual and audio aesthetic.

Well, Patrick Villard is now going to introduce some music to us, Kraftwerk's music. They are technicians that perfected robots, some of which have turned into a sort of human orchestra. [Eric Toussat] even built an extraordinary tour around them, which you're all invited to discover right now, along with our very own one-man orchestra, Patrick Willard.
(Music)

After spending 5 years in the studio transferring their songs to diskettes in digital format, Ralf Hütter, the master of Saintes and of Kraftwerk is back. In 1991, they were his robots, they will be on stage during the tour. Ralf and his three partners only want to make music. And the heads of these machines were made with their pictures to represent them.
(Music)

It's a human machine, it's really the symbiosis of man and machine which really interests us, the cooperation between them both.
(Music)

It's more like the rhythm of the machines, with, later on, the electronics that we were interested in, that are relating to mankind. Meaning that, the movements are mechanic.
(Music)

We wrote programs that will be synchronised with our music. Movements that are simple enough, like a sort of mechanical dance.
(Music)

The crazy dream of a musician with diabolical creations for the next century, Kraftwerk and their robots obey and repeat their synthetic songs at their command.