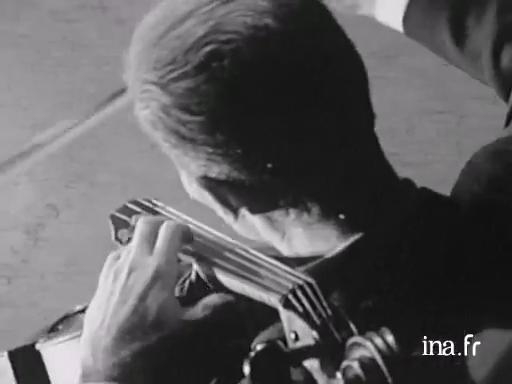 Conversation with composer Iannis Xenakis regarding his career path. Traditional Greek and Byzantine music, Bach, Debussy, and Bartok are amongst his influences and he pays tribute to Olivier Messiaen and Herman Scherchen. A cello player plays one of Xenakis's musical pieces.

Born in 1922 this Greek engineer first studied architecture and mathematics and he has worked with Le Corbusier. He then turned towards music, under that tuition of Olivier Messiaen. But the generalised serial technique, which was in fashion at the time, did not interest him. So he made original works, often using electro-acoustic techniques and based on calculations made by new computers of the time: (Metastasis,Pithoprakta,St 10,Hermafor piano...). Xenakis became quite a popular musician in the 60s, in harmony with the ideology of the era which sought new artistic paths. This was how Nights,Eonta and Terretektorh, (which tried to use the public and listeners) became symbolic works of modernity. Following that, Xenakis tried to marry architecture and music (Polytopes), with sounds and lines drawn on paper. These modern methods, used by a true musician, made violent and savage pieces, paradoxically received as primitive. At the end of his life, Xenakis evolved towards a dark and refined language (O-Mega). He died in 2001.

Born Greek, naturalized French, a mathematician and architect, he decided to express himself through music. He finds his inspiration in nature and in science. He sometimes works on a computer. Here's Iannis Xenakis.
(Music)

I studied in Greece. I started, then, I went to Olivier Messiaen who opened up my eyes here, in Paris, in 1950, 1949. Then, I was lucky to have a very dear friend, Hermann Scherchen, who directed my first works and who defended me against all, against everyone during the first years.

When you were a revolutionary?

In all music, since the beginning, there has always been the calculated side, but also the rational side, I'd say, which is the core.

There are lots of them. In traditional Greek music, for example, and Byzantine as well, who make the... It's the common core of the Byzantine Empire that, on the one hand, conserved antique musical thought. On the other hand, there's all of current Europe. And when I say current, I mean since the XVIth, XVIIth century at least with father Bach, with the romantic XIXth, with Debussy, with Messiaen, and...

Bortok as well, especially, of course. Those are the ancestors. And, from a methodological and thinking point of view, Aristoxene and Pythagoras are especially at the core of all that. And, I have to mention him once again, Messiaen, who, with his extraordinary teachings in that era and his freedom and his music and his thoughts showed me that it was possible to do something completely different.

You are one of the great masters of contemporary music, now.

Is that a question or an affirmation?

No, it's an affirmation.

How do you feel about that?

No feelings. I'm still as lonely as before.
(Music)
(Silence)