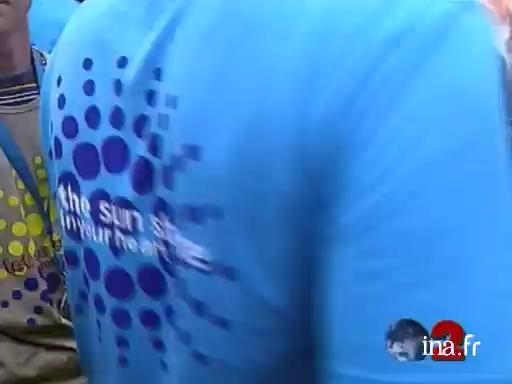 Report on the 9th edition of the Berlin Love Parade where nearly 750,000 people from all over Germany and all of Europe gather to dance to the sounds of techno music. This event, whose success is growing, should be decentralised starting next year so as to overcome security problems.

Created in 1989 by the Berlin DJs Dr. Motte and Westbam, the Love Parade soon came to be the meeting point for young Europeans who wanted to celebrate, much more than a simple emerging musical movement, a true "techno culture".

Organised in Berlin every year at the beginning of July, the Love Parade was at its heart influenced by the pacifist message of its participants (less than 200 in 1989): at the moment the Berlin Wall fell, their wish was to see their city reunited, if not the country, split in two during the Cold War. Over time, the gathering lost its political dimension to become an event largely dominated by brands and sponsors. Controversy began, the day after each parade, condemning the damage caused by the ravers, so the Berlin authorities had to tighten legislation, leading them to cancel the 2004 and 2005 rates. The Love Parade was born again in 2006 with the opportunistic slogan "Love is back". 750,000 people attended.

Meanwhile, the concept flourished in other cities: Techno Parade in Paris, Lake Parade in Geneva, Street Parade in Zurich etc.

It's without a doubt one of the craziest events of the year. It has been taking place in Berlin for the last 9 years, and more and more people are showing up for this Love Parade, a big techno parade through the German capital. In Berlin, somewhere from the crowd, our correspondent Jérôme Cathala.

We come from Belgium, in Flanders, Gand to be specific.

What draws you here?

It's all of these people here, who are expressing a sort of new culture that is developing.

A culture that doesn't exclude commercial preoccupations. Official t-shirts and books are selling well, but for most participants, the important stuff is elsewhere.

The music and all of the people here, it's fantastic, the atmosphere.

We come here, of course, to show off and to have fun amidst 40 trucks packed with speakers, cranking out techno. For hours, they will dance like this until they are exhausted. More than a hundred people, victimised by general discomfort, have already been hospitalised.
(Music)

With an estimated 750,000 people in the streets of Berlin, the Love Parade, or parade of love, has been a success. Too much, most likely, since it's now difficult to ensure the safety of all of these people. Next year, the parade of love will therefore, most likely, be decentralised in favour of several German cities. But meanwhile, today, the party isn't over. It will even last all night.